AAAAHHH GOD MAKE ITS DEAD EYES STOP STARING AT ME--- 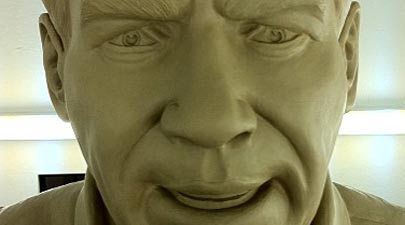 Most disturbing sex doll ever. The face of a dead dicator. A botched sculpture/tribute to Jason Robards. Alabamians unveiling their terrifying proximity to animism, idol worship, and slash-and-burn farming level civilization. Rob Ezell is sealed inside and screaming for help through the tiny airholes in the face, and will be kept alive and trapped inside for his insolence until death's sweet merciful kiss meets his lips. The teeth part to reveal a functional bottle opener. Inside each eye is sculpted the tiny reflection of a weeping secretary who failed to restock the oatmeal creme pie and Skoal cabinet. Blow into one ear like it's a conch shell and the other sound plays "Yea, Alabama." Blow into the other and pepper spray flies from the nostrils. No one's sure which ear does which.

The other important element from the preview images from the Tuscaloosa news: 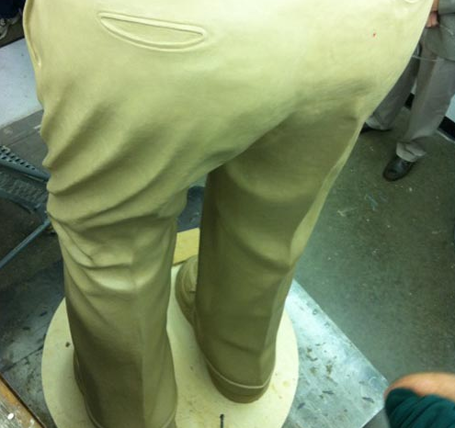 It's probably just perspective there, but we were unaware Nick Saban's lower half body double was Nicki Minaj. You're seeing him in the pink wig now, aren't you? And dreaming of cruising the Aegean with him on a luxury sailboat, right? Of course you are. The Aegean is lovely this time of year, and after all you're only human. The heart wants what the heart wants, and if the sight of Nick Saban's voluptuous posterior calls to you one can only blame the soul and its blameless desires. When Auburn's topiary of Gene Chizik is poisoned, know that the battle started at this moment.