Faithful boardmaster Brian took time off from letting the Russians use his penis as a space elevator--he's the low-budget competitor to Reggie Nelson Space Penis Elevators of Delray Beach, FL--to make the board for this week. Let him be praised, and follow along with the scoring below. 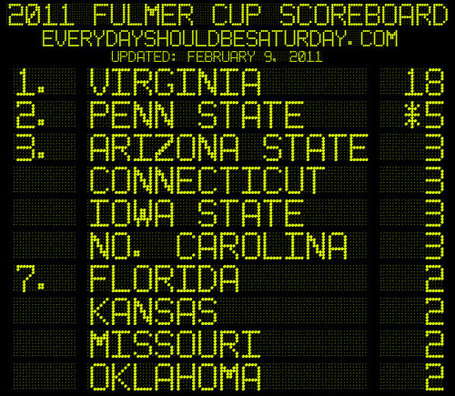 HAHAHA REMEMBER THOSE DEMURE LITTLE SUSPENSIONS AT UVA? Yeah, this is a load. Those three players, redshirt sophomore linebacker Ausar Walcott, sophomore cornerback Devin Wallace and sophomore center Mike Price, got into some kind of hellacious fracas at James Madison University. In the process, they may have become the second Commonwealth team in a calendar year to find serious trouble at the hands of the Dukes.

Redshirt sophomore linebacker Ausar Walcott, sophomore cornerback Devin Wallace and sophomore center Mike Price each face three misdemeanor charges of simple assault or battery and one felony charge of entering a house to commit assault and battery stemming from an incident that occured Jan. 30, according to Virginia online court records. The three players were arrested Tuesday.

So that would be three one point misdemeanors and one three point felony charge each, which is six points a person and thus a total of eighteen points total for the Cavaliers. A commanding lead early for the Cavaliers is the result, and reminder not to involve your ACC football program with JMU in any way whatsoever. It will only lead to pain.

PENN STATE GETS XTREEM WITH THEIR DUIs.  PSU offensive lineman Johnny Troutman was good and drunk, and this is not a bone of contention here. A lineman weight upward of 300 pounds. To get a 300 pound man hammered they need to drink no less than a quarter of the bar's stock and/or eat Peter O'Toole. This is obviously a joke: Peter O'Toole wears an ascot not as a form of decoration but as a bright warning to predators, one that says eat me and die of alcohol poisoning. He's the poison arrow frog of British actors in this respect.

We will debate Pennsylvania's definition of "extreme DUI"--

---because Terri Comer sees your 0.10 and laughs a pitiless laugh. At this point she'd make a gang sign with a 7 and a 2 in it, because she holds the belt for highest recorded BAC ever. That is extreme DUI by our definition, but we don't run Pennsylvania, and that's a damn shame since we'd just sell trade the entire state for the island of Cuba and give Joe Paterno the sunny, warm retirement home he deserves. ("Eh, not so big on Havana. Too modern.)

A DUI regular is two points, the XTREEEM DUI charge will serve as a bonus point, and driving without a license and failure to obey a traffic device (um, this?) are a point a piece. That is five points total for the Nittany Lions, who would have had a handy lead if UVA hadn't decided to go buck at JMU.

NORTH CAROLINA EARNS LESS EXTREME POINTS. AJ Blue got what is in comparison a gentler regular DUI, an offense earning the Tarheels two points in the Fulmer Cup. As long as an agent didn't buy you those drinks, son, Butch Davis is disappointed but still sort of relieved.

KANSAS FAILS TO LIVE UP TO ITS STORIED HERITAGE. A standard two point DUI for receiver Chris Omigie is standard issue Fulmer Cup nonsense, but we remind you that no one on Kansas' roster has yet to live up to the greatness of their forebears.

Dion Rayford, 24, allegedly became angry about 2 a.m. Wednesday when he didn't get the chalupa.

"When you take a big guy and put him through a small space, something's got to give," Wheeler said.

It's memory of our better that are keeping us on our feet, Kansas. #ChalupaGate #NeverForget