AWWW, HE IS THE CUTEST. Cash is powerless against the power of the dark side, Auburn. 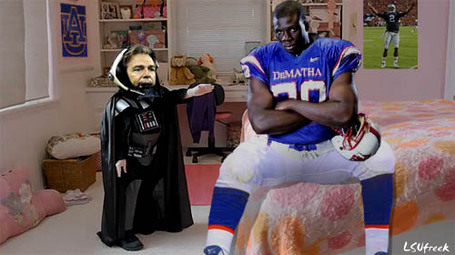 BRADY HOKE IS THE FUNNEST INTERVIEW MICHIGAN'S HAD IN A WHILE. Not since the Gary Moeller days has Michigan had a more entertaining interview as a head coach, but that is a very low grading curve we have here. Rich Rodriguez was walking pablum undershot with desperation, and Lloyd Carr alternated moments of grandfatherly winking with long stretches of saying absolutely nothing whatsoever.

Hoke, however? Positively avuncular, and possessed of a certain candor we have to like. He also used the word funnest, but we'll defend him for this since the comparative and superlative version of fun really should be funner and funnest. He also liked or likes beer. Yay you, Brady Hoke.

Q. Did you just drop a hint you were a bit wild back in your college days?

A. Uh, yeah, for two years I really didn't have the best goals in mind. I wanted to play football and try to drink every beer in Muncie, Ind. And I tell parents that on visits.

The ringtone to his phone is "Who Are You" by the Who. This is necessary information.

SPEAKING OF COACHES WHO SEEM MORE LIKABLE EACH DAY.  Mike London is the only coach at the FBS level we know of who has actually stared down the barrel of a gun (Barry Switzer is retired, after all), so by definition we respect the hell out of him (especially because he admits it was really not a fun thing.) So suspending three players, man, it's no big deal, since it's not a drug dealer threatening to shoot me dead.

I WILL KILL THIS CHAIR AS AN EXAMPLE TO YOU OF WHY YOU SHOULDN'T DO DRUGS WAIT WHAAA--- Will Muschamp allegedly smashed a chair in his "discussion" with Janoris Jenkins following his marijuana arrest. Remember, if he wins it's "[NAME REDACTED]-ish." Another terrifying note from Buddy Martin (who is always sort of terrifying in his own, doddering way.)

Don’t ask me how I know this, but I’ve got a feeling the offense Charlie Weis puts on the field this season won’t be what we think it’s going to be --- whatever you are thinking. That’s because I don’t know that Weis and Muschamp have even decided that yet.

/puts away for safe keeping and later use

PAC12.COM IS NOT WHAT YOU THINK IT IS. "Fuck L-Scott and the clique he claim/ My site till I die 'less you buy this claim."

HE'D TAKE YOUR CHECK, FOR SURE. Don't think it far-fetched, because Ari Fleischer would take anyone's money to say anything, especially Nebraska's. "Madam, Bo Pelini did not bite your arm in a dispute over weak coffee he purchased from you at a Starbuck's; he was merely trying to show you what real strength was, just like the strength he demands from his football players and his coffee"

AND NOW HOUSTON NUTT WILL SIGN FIVE MEN TO REPLACE HIM. KR/PR Jesse Grandy of Ole Miss has left the team due to family issues, and will likely not return.