Welcome to the Digital Viking: The EDSBS Guide to Spicy Living. Published every offseason Friday, the Digital Viking embraces zesty living with a six-part review of the essentials:--A patron saint invoked for inspiration --Drink--Comestibles--Combustibles--Transit--CanonDiligent study of the Digital Viking's recommendations will increase spiritual happiness and liver circumference. Apply weekly and live daily for best results. 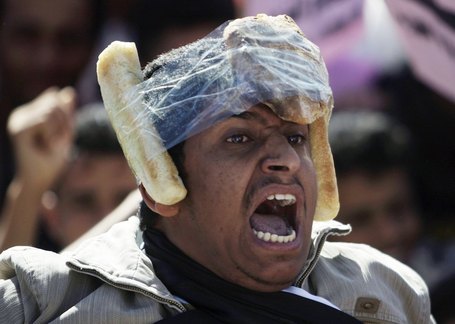 Bread Helmet Guy, I don't know what you want, or why you have bread strapped to your head. There could be many reasons. Maybe the Olive Garden killed your family, or maybe you're taking advantage of Mubarak loyalists' well-known fear of refined carbohydrates. I will congratulate you on your engineering skills, as stacking the long breadsticks down the side of the head as buffers but loading the big bun up front really is identical to the kind of padding you see in modern football helmets. You've clearly thought this through.

I also don't know what protection that would afford against the batshit crazy guys with swords on camels running around Cairo right now, or whether it would keep you from being a shade less dead when a security forces van goes GTA into the crowd and sends you spilling into the sidewalk like a bowling pin wearing a helmet made of bread. I do know this, though: that's the kind of deranged testicularity and ingenuity we like to reward around here, and thus dub you the Patron Saint for this week. Asalaam Aleikum, God Bless, and keep your ass safe until this dies down, Bread Helmet Guy.

To the Spicy Living:

Holly: Do you live almost anywhere in the country where it is weather? Then you are aware that IT IS UNACCEPTABLE OUTSIDE. Mexican hot chocolate is your friend. Drink it. Fatty milk is essential, as is unsweetened cocoa powder (you can sugar it up yourself this way and not fill your system with seventeen-word binders). The cinnamon and chilies you will add make it Mexican. The many liquors you can add to it make it sleepyfying, which is lovely, because WHO WANTS TO LOOK AT THE WORLD RIGHT NOW EVERYTHING IS TERRIBLE.

Orson: We're on a few days straight of rain here, and there is but one thing to drink when it's raining non-stop outside, shows no signs of stopping, and life seems like a long, ever-slowing toboggan ride into Sucktown: 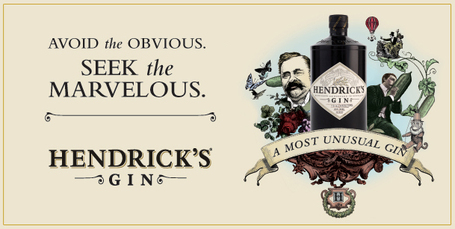 Lies: we mix it with all kinds of things to keep the variety lively, and because a cocktail is more than just the alcohol, it's the flavors mixing together while you socialize and mingle yourself, because isn't life just one big cocktail!

Truth: we drink it with half an inch of tonic, four ice cubes, and do not vary this routine while watching too many reruns of The First 48 and To Catch A Predator. Fuuuuuck winter in all its forms.

Orson: We like to think of ourselves a sausage evangelist--wait, wait, that's totally wrong in every way, but there really is no way of saying "I like eating penis-shaped things" without sounding homosexual, and that's fine. If gay for sausage means gay, then I'm Neal Patrick Harris cloning myself in order to have gay sex with an army of other Neil Patrick Harrises.

The Pine Street Market in Avondale Estates is one of those places that makes "artisanal sausages,' an asshat term for a decidedly unasshattish thing: charcuterie made well with fresh ingredients. The Coppa is cut with beautiful strands of porkfat; the chorizo is insane; the Mettwurst is so German-tasting a few bites gives you the urge to stop hugging people altogether and trap your children in a basement for 20 years.

The good news is that there's probably some place like this around you, especially if you're in the Midwest. Say what one will about the Big Ten, but sausage is their decided strategic advantage and will be until the last ancient slavic granny falls off the sausage grinder.<----This is not a euphemism VISUALS OH GOD THE VISUALS.

Holly: The best of all bar foods is, of course, peppers stuffed with things and wrapped in other things. We're on a bit of a Tex-Mex kick thanks to the presence of some big-deal football game (played by grown-ass dudes but it will do until real football with our bros comes 'round again) in a place called "Dallas" [waits patiently by inbox for butthurt emails screaming ARLINGTON YOU FECKLESS WHORE], and we also like foods inside of other foods, so please enjoy our girl Sarah's stuffed peppadews for a moderately spicy appetizer. When you're ready to turn up the volume along with the tempo, brace yourselves for the most amazing headline we've ever seen (next to this, of course):

Obligatory mothership plug: I also wrote a bitchin' recipe today for the dot-com that details the making of one of the very first food items featured in this space. Consume!

Holly: VITAL INFORMATION FOR YOUR SUPER BOWL PARTY THIS WEEKEND:


Why this doesn't come with a Limp Bizkit soundtrack, we will never know. Use this trick to rain shattered glass on fans of the other team in your own living room! [EDSBS REMINDS YOU TO PLEASE ASSAULT RESPONSIBLY.]

I'm getting two and loading all the chambers in both with rock salt. I don't want to hurt anybody, but I do want to really, really piss everyone off in a very painful way.

Orson: Hamster tubes. Oh, you little bastards. If you only knew how my childhood jealousy of your amazing transportation system between cedar shaving-lined rooms lingered on into adulthood. 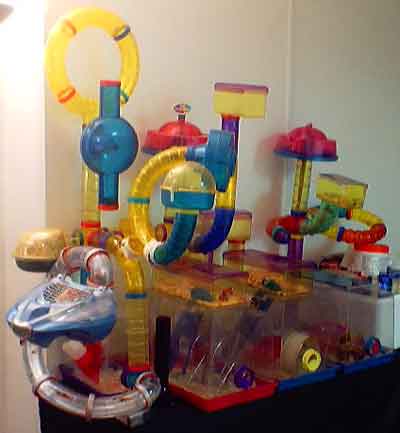 If I could build a house that had a major hamster tube component, I totally would, but Nike and Phil Knight will beat me to this when the new Oregon football fun center/academic assistance hall opens up in 2014. They'll have some perks that won't fly at my house like the Knight Clothes-Removing Wind Tunnel For Lusty Lasses, but that's what I get for not founding Nike. 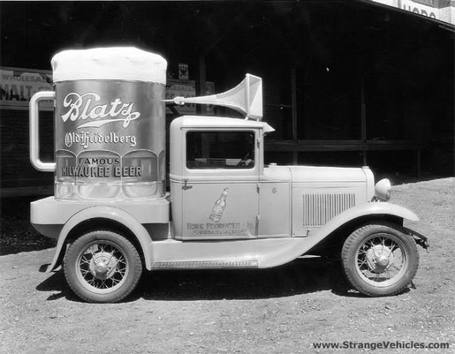 I don't think I'd drink it, but I'd like to swim in it. True of a lot of things in this world, no?

Holly: We are retroactively furious with the lot of you for not alerting us to the existence of The League in its first season. The presence of the abysmal Always Sunny in its lead-in timeslot worked as a remarkable deterrent, and NOBODY TOLD US.

This show is too new to be in any sort of pantheon (we make the exception for Archer, but that is all), but it is the definitive model for modern human friendship of a more accurate sort than we have ever seen, by which we mean that everybody in it is horrible to everybody else and it doesn't matter because it is funny.

Orson:  Bizarre Ride II: The Pharcyde, The Pharcyde. One of the most hip-hop of hip-hop albums for so many reasons: it's the best and first album by a group (not uncommon,) the band fell out with their producer shortly afterward, thus prompting said genius producer into a two-decade struggle with crack (drama, mandatory,) and like the best it still sort of makes the hair on your arms stand up a little bit with its anomalous brilliance.

Kanye West called it his favorite album of all time, and that means something because you know he really, really like his own albums a lot, Liz Lemon. They really only did it once, but stars only go supernova once, and you don't hear a lot about that being disappointing from many people. We close our argument with this: ya mama, ya mama, ya mama.