LET'S CONGRATULATE ALABAMA. By showing a video of Nick Saban taking a sword in the face.

Alabama picked up their 83rd National Title last night by clinching Rivals' number one recruiting class, just edging Florida State for the top spot with hustle, good scouting, and ass. We believe Florida State was cheated of this title unfairly. They should have been awarded greater points for the signing of Sterling Lovelady. You heels understand nothing about style, Rivals. (HT: Jeremy.)

. Auburn might have been there but not for the saga of Cyrus Kouandjio, whose agent Jimmy Sexton is negotiating between Alabama and Auburn for the best deal family may end up voting on his eventual destination. Mike Locksley, the dream is still alive! Just keep punching away and it'll hit the mat of your reality! Fun notes of fun nature: the SEC's worst class was 44th in the nation, and out of the top twenty prospects in the nation only one went to a Big Ten school: Curtis Grant, who opted for Ohio State because "Coach Tressel is a real cool guy." We are not at all tapping our toe on the biggest fault line in college football fandom, and would never troll so deliberately. 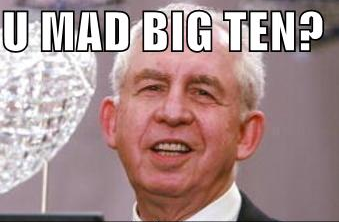 A SUCCINCT SUMMARY OF CONDITIONS ON THE GROUND. Hutchins has the full roundup of all the imaginary football teams people built yesterday. Today they begin blowing out ACLs, missing class, and getting DUIs. (Yes, we see this. Cupdate to come.)

COUTURE OF THE DAY. Isaiah Crowell and his dog (who does have a name, btw, and a predictable one in "UGA,") won the presentation award yesterday, but the style award goes to De'Anthony Thomas, the "Black Mamba." He not only stiffed Lane Kiffin at the last minute (+billion), but he faxed his LOI to Oregon at 9:30 a.m. PST, kept everyone waiting all day, posted balloons with both USC and Oregon colors on the stage, and then rolled in at 9:30 EST dressed in this. Holly and ourselves decided last night that the only more swagtastic way to announce yourself would be showing up in your regular clothes, pulling out an orange and blue wrapped blunt, lighting it, and then exhaling the smoke while giving a lazy Gator chomp, nodding, and saying "y'all already know."

RELEVANT TO THIS DISCUSSION: Florida's class was passable to good given the circumstances, especially in holding onto Ja'Juan Story at wideout and preserving the existing class with a month for Muschamp to introduce himself properly in state. We did sign mustard-eating Valdez Showers, and that's all that really matters here besides not having anyone arrested on the eve of signing day. (In addition to Jeff Driskel, of course hearts hearts hearts.) In more uplifting news, um...our ESPNU logo is INCREDIBLE. #vaginadentata

WATCH THE MASTER AT WORK. There are times in this video where [NAME REDACTED] appears to be staring at technology still stunned by its power like an ape smashing bones under the watchful gaze of a monolith. (HT: HTTO) "(Make Love) In this Club" and his face are now forever associated in your head. You're welcome.