CORRECTION: That's Libya, but Qadafi and Nutt would get along even better, actually.

AND NOW HOSNI MUBARAK WILL FOREVER FEAR THE SOUND OF COWBELL. Reader David's screencap eye is astute and faster than the normal human's, and thank goodness for that because otherwise we would have missed how the Egyptian Revolution happened so quickly. The answer: SEC SPEED AND COWBELLS. 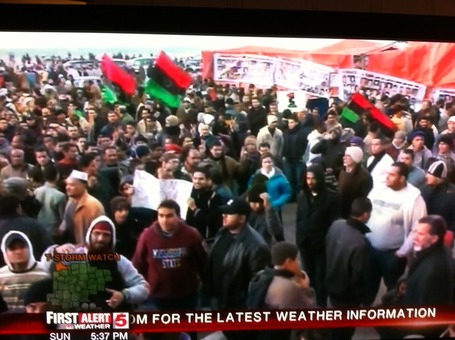 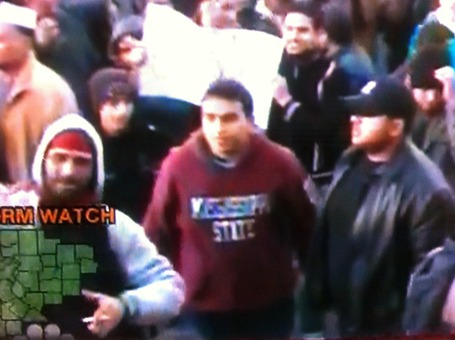 WOOF. And they would fall to the sound of the clanging, the unceasing clanging, and forever Hosni Mubarak would be an Ole Miss fan, coming to games in exile and smiling with Houston Nutt. Nutt would later describe "Hockney Madras Shack" as one of his best friends.

SOME POTENTIALLY GOOD THOUGH CAUTIOUSLY OPTIMISTIC NEWS: The oak trees at Toomer's Corner may be only slightly poisoned, and that's better news than they've had on the iconic landmarks than anything else officials have heard.

SHANE MATTHEWS EVIDENTLY LOVES THE SHIT OUT OF CHARLIE WEIS' OFFENSE. Shane Matthews was always critical of the spread option, so it's not really a shocker the former Gator QB would be really, really excited about the prospect of a pro-style, under-center attack coming into Florida. There's a longer post coming on this later, but one key trend in Weis' time was the simplification of the offense over time, with Brady Quinn running a significantly more diverse offense by formation than the one Clausen ran in Weis' last two years. Whether this was a permanent adjustment to college learning curves or a temporary tweak remains to be seen, but if Brantley's the starter as a rebuilding project we'll bet on simpler over more complex.

WOOOO WE WON A JEFF DEMPS! Thought we already had one, but if Muschamp says we won a Jeff Demps, we guess we won one.

DID YOU ATTEND RUTGERS OR SORT OF KNOW WHERE IT IS? Then you can take part in our extremely pushy marketing scheme, something Georgia Tech has used to increase their ticket sales via Boiler Room-style phone rape. I

LANE KIFFIN WILL HAVE A PROBLEM WITH THIS THE MINUTE THEY START RECRUITING A GAY QUARTERBACK. A young sheltered athlete has a problem with teh gayz? We smell a story! Not really! Though we do love the defense of "I'm just standing up for what I believe in," which is what we tell our neighbors when shooting pumpkins in our backyard at 2 a.m. blind drunk on paint thinner. You call it disturbing the peace, we call it "Bi-winning." Fun fact: the discharging of a firearm in the middle of a residential area in a non-self-defense situation in Atlanta isn't even in the criminal code, and is merely a city ordnance. BLAST AWAY ATLIENS.

GREG MCELROY IS QUITE INTELLIGENT BUT LET'S REMEMBER THE IMPORTANT PART.  Greg McElroy got a 48 on his Wonderlic, and thus another National Championship falls to Alabama, but let's keep the important part in mind: filing your Cam Newton Wonderlic prediction early and often. We stand by our call of 14.