SERIOUSLY, WE'RE NOT THAT BAD

Share All sharing options for: SERIOUSLY, WE'RE NOT THAT BAD

America's the best, but you knew that already since you were smart enough to choose to be born here, most likely. We're awesome for so many reasons: the Crash at Crush, Futbol Americano, our relentless reclamation of the things your country likes by claiming them as ours and/or making them better, a vast font of quality pornography, buildings shaped like the food they serve, coffee served 25 hours a day wherever you go, flyovers at even small sporting events, and the ease with which you can detonate explosives or fire off guns without a chance of coming close to harming someone. West Texas says you are welcome for all that empty space, y'all, and that if you could send Mike Leach back as soon as possible they'd appreciate it because having CNN all up your ass over salaries never would have happened without a shed, an idiot and the unfortunate meeting of the two.

We also rule--and we mean this quite seriously--because this doesn't happen. 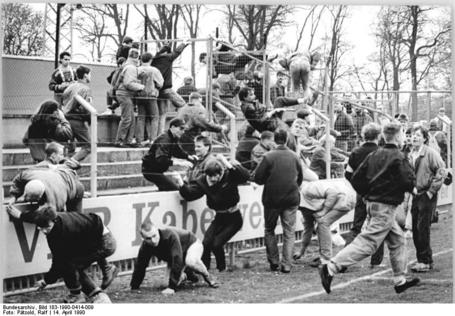 We don't riot over tickets. For the most part, we don't riot over games. (That qualifier brought to you by L.A. Lakers fans. LAKERSSSS.)  The greatest single incident of violence we have ever seen at a game not involving Rey Maualuga hitting someone came in the 2007 BCS Title Game buildup where we watched a New Orleans bouncer separate an LSU fan and an Ohio State fan at a bar and eject both bodily into Bourbon Street. You know you're a badass when you measure your power clean in terms of people, not pounds. ("I'm a two and a half drunk douchebag power clean at this point.") The two got up, stared at each other, and then just wandered feebly into the crowd.

We might cheat, sure, and have arcane rules about our semi-professional sports leagues, but on the whole the one thing we don't do is actually beat the living shit out of each other en masse.*  Sports in the United States have remained mercifully low on both violence and the violence-begetting political affiliations you find in many districts of global sport. Spartak Tuscaloosa doesn't exist, and AC Columbus and FC Gainesville will not begin throwing flares onto the pitch and heaving scooters off the upper deck anytime soon.*

If Jay Paterno is concerned like everyone else about Toomer's Corner/Trees/decline of civility etc, that's probably a very good thing. It's this kind of hypervigilance that, while really annoying and nannying at times, ultimately prevents people from accepting profoundly antisocial behavior. You should also note that this being publicly rebuked by those who could in theory applaud it is an indication that as concerned as you might be, it's the equivalent of one broken window in a nice neighborhood compared to what goes on elsewhere.

* A list of clarifications you have to throw out for the extremely soccer-sensitive. No, this is not limited to soccer, a sport we love dearly, but when you're the sport a neo-fascist or ultranationalist group latches onto it's not really your fault, now is it? No, we don't hate soccer and do not think hooliganism is as much of a problem as it was in the late '70s and early '80s. Yes, we do sort of crave the right to light roadflares during games. No, we wouldn't be responsible with them, either. No, you really shouldn't be so sensitive about your sport as it is the world's most popular pasttime behind eating, reproducing, and the rehearsal sessions for reproduction.