WE KNEW WE HAD SEEN THAT BEFORE. Freek and ourselves had a contest for who could remember where we'd seen Steve Spurrier's torso before, and Freek beat us to it. 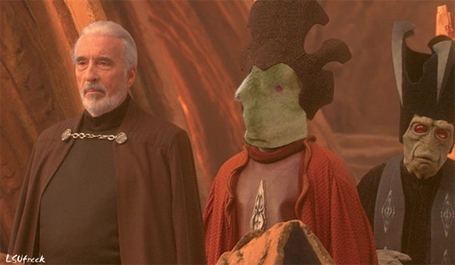 The resemblance is uncanny.

THIS WAS A TERRIBLE IDEA AND THERE ARE EMAILS THAT PROVE IT.  Via BGHP, the Des Moines Register FOIA'd 137emails from the Iowa athletic department post-RhabdoGasm and finds that yes, some people thought in advance that the Hawkeye Athletic Department's handling of the situation was going to be disastrous. Kirk Ferentz will now not comment on anything for the duration of his career ever to anyone.

WE THOUGHT HE HAD ONE MORE TRANSFER IN HIM. Steven Threet's dream of becoming the first D-1 football player to play for all 119 schools in the division has come to a sad end thanks to [A NATURALLY OCCURRING PHENOMENON THAT NEITHER THE NFL NOR ANY D-1 SCHOOL IS LEGALLY LIABLE FOR BECAUSE OF AN UNDERSTOOD ACCEPTANCE OF RISK.] While this is sad for Threet, we would gently point out that going to Arizona State and playing in Dennis Erickson's neato protection-free offense probably wasn't the best choice in hindsight. Archaeologists of the future will marvel at the number of human ribs belonging to young men between the ages of 18-22 on a single square of land in Tempe.

DENARD ROBINSON, WELCOME TO RANDLE-EL-HOOD. Michigan's new "downhill" offense will need running backs of size and import since offensive coordinator Borges happens to really like those, and Michael Shaw and Stephen Hopkins come closest to filling the profile size-wise. If both happen to emerge, that's not a concern since Borges was at his best juggling two running backs in the offensive game plan, though it bears mentioning that anyone can look stonking brilliant with Cadillac Williams and Ronnie Brown in the same formation.<----NOTABLE EXCEPTIONS: Steve Addazio, Gary Crowton, and this dude DERRRP.

In other Michigan news, the man refuses to soil his dignity with children's games! That's a Michigan Man, who nods grimly at children and when asked "What am I getting for Christmas, papa?" only answers "The cold wind and driving snow, son, and nothing more. You will like it."

NOTHING TO SEE HERE. LIterally, like, nothing thanks to all those black blocks, Tennessee.

THE ALMA MATER STANDS HAPPY AT YOUR CONCERNS AND FOCUS IN LIFE. Ass-nairing is a topic of intense concern to us at the University of Florida. (Via)

THIS IS THE SINGLE GREATEST LOVE LETTER EVER WRITTEN. Dre's signoff here is now going at the end of all tender correspondence.