WHAT WOULD A WHITE-COLLAR FOOTBALL TEAM LOOK LIKE, ANYWAY? 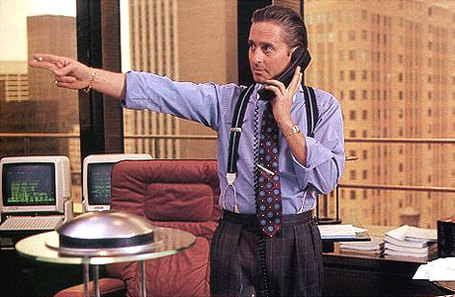 During the run-up to the Super Bowl, you couldn't swing a dead cat without hearing someone extolling either the Green Bay Packers or the Pittsburgh Steelers for their "gritty" playing style and their "blue-collar" mentality. Which got Holly and Doug to thinking, what would a football team with a "white-collar mentality" look like? Our best guess follows.

SEAN McDONOUGH: Welcome back to the 2011 InscrutiCorp.com Bowl, where the Tigers are clinging to a slim lead, 17-14, and the Wildcats face third and long from their own 37. Tigers' defense showing blitz as Johnson takes the snap, backpedals, he's looking for a receiver -- and hits a wide-open Dauntrell Jenkins out at the Tigers' 41 for a big third-down conversion. And Matt, it looked like some miscommunication out there in the Tigers' defensive backfield.

MATT MILLEN: Definitely, Sean, you can see Woodward here on the far side, he's coming up to join the blitz, and he motions for Meriwether, the free safety, to take his man in the slot. But either Meriwether didn't understand what Woodward was saying or he just didn't see him, because he lets Jenkins run wide-open for a big play before Rod Nelson can take him down with the open-field tackle.

McDONOUGH: And that's something that's become a hallmark of this Tiger squad -- they're not the grittiest team out there, they don't always make the play, but they're master delegators.

MILLEN: Yeah, very rigid structure for passing around responsibility on that team, which is what makes a lapse like that so surprising.

McDONOUGH: And on the sideline, you can see the defensive coordinator asking for an explanation, and both Woodward and Meriwether are giving their excuses. First and ten for the Wildcats now, and the flags fly out, looks like someone on the defense jumped early, let's see what the ref says.

McDONOUGH: Wow! It really looked like Andre Wiggins moved there on the left side of the Tigers' defensive line, but the Wildcats get penalized.

MILLEN: And yeah, on the replay here you can clearly see that Wiggins moved first, but not enough for the ref to catch it, and instead the Wildcats' offensive lineman jumps and he gets flagged.

McDONOUGH: We'll go down to Heather Cox on the Tiger sideline -- Heather, this is something the Tigers work on pretty regularly in practice, isn't it?

HEATHER COX: Yes, Sean, in fact they have a whole series of drills where they practice goading the opponent into committing penalties. False starts, pass interference, even some unsportsmanlike conduct and late hits and that sort of thing -- they are the masters of committing penalties that other teams get caught for.

McDONOUGH: (chuckles) Maybe not the most ethical way of doing business, but you've got to admire their cleverness.

COX: As for that last play, guys, I'm told that Woodward wasn't supposed to be part of that blitz package at all, but he pled his case to the coaches and now Trevon Carter, the third-string cornerback who was pushing Woodward for playing time, is being taken to the locker room. Word is he's been cut from the team as a result of all this. Sean?

McDONOUGH: Wow. Dog-eat-dog world there on the Tiger sideline. All right, first and fifteen now from the Tiger 46, Wildcats in the shotgun, three wide, ball is snapped, Johnson looking, looking, he launches it, and -- intercepted by Isaac Mayfield on the near side. Mayfield has it at the three, and he -- wow, he takes a knee. Strange decision by Mayfield, who was in the end zone and came back out, maybe he thought he was still there -- but he takes a knee right in front of the Tigers' cheering section and takes the ball with him back to the sideline.

MILLEN: Wow, that crowd is going bananas over there, Sean, it looks like they're begging Mayfield to jump up into the stands or throw them the ball or something, but . . . he's kinda acting like they're not even there.

McDONOUGH: And it should be said, Matt, that the relationship between the Tigers and their fans can be a bit testy at times -- some would say that there's open contempt for the fan base from the Tiger players.

MILLEN: And yet the fans keep on coming back in spite of it. That's just good marketing, Sean, another thing the Tigers are known for.

McDONOUGH: For word on what happened to Mayfield, let's go to Heather Cox again -- Heather, it looks like he's going straight to the training table to get worked on. Did he hurt himself when he made that interception, that's why he immediately took a knee?

COX: No, Sean, the trainers tell me that Mayfield just didn't feel like extending the play and running the ball back. He says, "I did my part, now it's the offense's job."

McDONOUGH: Kind of a selfish attitude on Mayfield's part, but he is a first-team all-conference player who was a finalist for the Jim Thorpe Award this year -- sometimes you just have to let your stars do what they're gonna do.

COX: As for the training table, it's customary for all players on the Tiger squad to get massages immediately after making a big play. Sometimes means they have to miss the next play, or even the next series, but it's like the coaches tell me -- "Gotta make sure our top guys are rewarded." Sean?

McDONOUGH: Well, and it's probably no coincidence that the Tigers are at the top of the recruiting rankings every single year. Tigers will start from their own three yard line now, quarterback Chuck Daniels is under center, takes the snap and pitches right to the fullback -- Mike Stanton rumbles forward for three yards to the six.

MILLEN: Sean, that looked an awful lot like an option play -- Stanton has both Ty Weathers and Kwame Colbert wide-open thirty yards down the field, but he tucks it and falls forward for a short gain.

McDONOUGH: Doesn't stop Stanton from high-fiving everyone on the team, though, he's celebrating like he just scored a touchdown.

MILLEN: What can you say, Sean, kid loves the spotlight.

McDONOUGH: Another selfish play from the Tigers brings up second and seven, Daniels under center again, backs in the I, ball is snapped, the Wildcats rush eight, and Daniels is on the run. Lets it go at the last minute, and Lewis makes a diving catch on the near sideline for the first down, but -- no, refs say he was out of bounds, incomplete.

MILLEN: Players, though, are yelling at the ref, saying Lewis got a foot down. We may see a challenge here.

McDONOUGH: Yes, on the replay you can clearly see Lewis tap his toe right at the 20 yard line, but the ref just didn't see it -- and yet no challenge flag from the Tiger coaches. The crowd is going crazy, but the offense heads right back out on the field, third and seven from their own six. Daniels in the shotgun again, ball is snapped, and oh, boy, Emmanuel Cartwright blows by Armanti Ross on the near side to sack Daniels all the way back at the one yard line.

MILLEN: Ross, in the slot, is supposed to help block Cartwright, but we've seen this happen before -- he doesn't like blocking, so when he knew he wasn't going to get the ball, he just gave up on the play and let Cartwright get by him for an easy sack. Ross has a reputation for being a high-maintenance guy, and he clearly wasn't happy with the play call there.

McDONOUGH: For more we go down to Heather Cox -- Heather, any word on why there wasn't a challenge flag on the incomplete pass there?

COX: Sean, I'm told that Coach Kiffin was on his Blackberry talking with his hedge fund manager and didn't even see the disputed catch. Now, that might sound unusual, but the Tigers don't have any restrictions on cell-phone use on the sideline, for coaches or players. At any given moment there may be a dozen or so players talking, texting or Tweeting -- in fact, linebacker Austin Ferguson has his laptop out, and he's doing a live chat on ESPN.com about the bowl game, the upcoming NFL draft, and what kinds of suits he likes to wear. Log on at ESPN-dot-com-slash-livechat and you still have time to participate.

McDONOUGH: Again, it's a tough crowd over there on the Tiger sideline. Wildcats call time out, they should get the ball back in pretty good field position after the punt -- we'll pause for a brief commercial break and bring you more of the 2011 InscrutiCorp.com Bowl after these messages.