Share All sharing options for: FULMER CUPDATE: UTAH GETS TIPSY ON WEAK BEER AND INJURED BOREDOM

This week's big board is produced by Brian. His wedding tackle is currently being used as a barrier by rioters in Tripoli, where the crowds rejoice "PROTECT US LIKE THE GREAT MAN-A-CADE OF REGGIE NELSON."  Clarifications and video of a Ute linebacker facing the wrong way on the interstate follow. 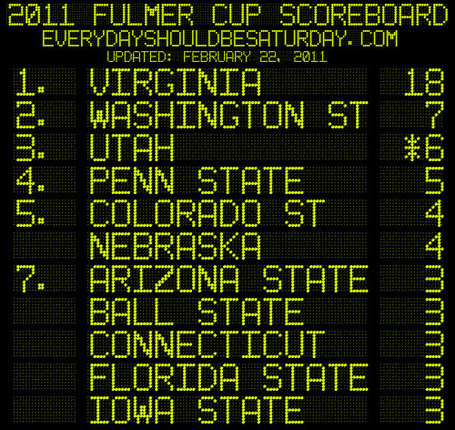 UTAH ENTERS A BCS CONFERENCE WITH VIP BAC LOL. Utah linebacker Nai Fotu scores a conoisseur's DUI over the weekend, and we mean a truly top-shelf, no-chaser DUI. Fotu was pulled over on Sunday morning in Salt Lake City after drivers reported an erratic driver on SR 201. The brilliant passersby noted this driver as erratic because he was facing the wrong way and driving down the freeway. Residents of Utah miss nothing.

Fotu then had the following exchange with the visibly astonished trooper conducting the traffic stop.

Fotu tells the trooper he was with his teammates at the university.

Fotu slurs his words during another conversation with the trooper.

"Do you even know where you are right now?" the trooper asks.

"You're in Utah? Where in Utah are you?" the trooper asks.

Duh, stunned trooper. Freeway, Utah. Population me and you and this car, which shit, that's facing the wrong way, isn't it? Did I do that. I hope I didn't because man, that's Moldovan Space Program drunk if I did that. Fotu then blew a .218 on the breath test, a sum that in Utah is almost three times the legal limit, and crosses the Nolte threshold of triplicate legal intoxication. In short: Fotu was fucking hammered as hell and driving the wrong way through the town of Freeway, Utah, which is actually just a freeway.

Video is below, and we've been there, but instead of a car we like to call it "the years between 24 and 26," and the freeway was "life and the little precious time you have on this earth."

Normally a garden variety DUI is two points, but Fotu was almost tripled up BAC-wise and driving the wrong way down the interstate. The three point extreme DUI is brought out special for the occasion here, and a bonus point is applied because yeah, wrong way driving down the interstate is a bonus, especially when you tell the officer in extremely slurred words that you only had one or two beers. (Standard beer size in Utah: one Royal Navy regulation grog barrel. Screw you, judgey Mormons!)

The open container charge and lack of license make Fotu the new Ellis T. Jones Award leader, and also award Utah a total of six points in total for the offense. If this is the opening salvo by Utah in letting the Pac-10 know they take this shit seriously, the rest of the conference does not stand a chance.

A FEW EDITS. Bobby Big Wheel, legendary Deadspin commenter and UVA partisan, points out the SAS lack of scoring for Nebraska for walk-on defensive lineman Justin Jackson's basic DUI and citations. The sum total should be four points for Nebraska here, which we will note on the Big Board with the next update.

Also missed in the hectic pace of the 2011 Copa del Fulmer is the check-kiting arrest of Colorado State assistant coach Todd Stroud, arrested on campus last week for theft after writing a bad check. Oh, please, please let this have happened at practice, if only to boost CSU's street cred. Coach got got right there at practice and didn't even flinch? SO STREET. Even if it is a misunderstanding, don't hesitate to make lemonade out of lemons, CSU.

The felony theft charge and coaches' bonus therefore gets CSU four points in the Fulmer Cup.