Share All sharing options for: PRESIDENTS DAY DRAFT GUIDE (TO THE PRESIDENTS) 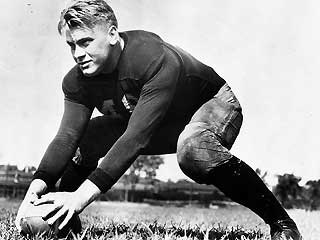 The NFL combine is the time of year when your pro football monogamous friends, terrified at the blank slates of NFL prospects coming onto their team's draft boards, begin to ask you about college players they have knowledge of whatsoever. This leads to moments of great illumination between the two of you.

Them: "So, what about Gabe Carimi?"

You: "Can only block during afternoon games. Darkness terrifies him."

Them: "How about Patrick Peterson?"

You: "Only born with one buttock and can't turn head to the right."

Them: "And what about Jake Locker?"

It's that kind of insight we apply today to the Presidents in order of draftworthiness, football-wise.

1. William Howard Taft, Nose Tackle. A big man with good hands. Thicker than a copper bathtub through the ass, an important asset when talking about nose tackles. Nimble enough to construct Anti-Trust legislation and then properly evaluate it as a jurist. Endurance (one term) is an issue.

2. Theodore Roosevelt, Fullback. He's going to want to play quarterback, but whatever you do do NOT let this happen. Undoubtedly tough, and will be the first one to point this out to you.

4. Herbert Hoover, Quarterback. (Evaluation offered by Guest Commentator Todd McShay.) "The best prospect I've seen in three decades of following the draft. Size, speed, intelligence, and the ability to adjust on the fly. Draft him, and a team will solve their QB issues for a decade." 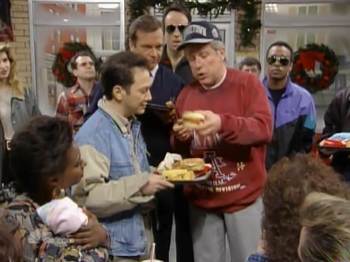 5. Bill Clinton, Running Back. An amazingly elusive open field runner with penchant for fumbling the ball with the game on the line. Character issues are a genuine concern, as he once texted inappropriate images to a female trainer. Gets great penetration. Often found out of position; puts ball where it shouldn't go. Conditioning is suspect.

6. Ronald Reagan, Quarterback. Charismatic and well-liked by draft analysts, but lacking an impressive stat line. Like the best quarterbacks, seemingly has no memory. Great in rivalry games. Think Brett Favre.

7. Grover Cleveland, Offensive Tackle. A massive, physically imposing specimen. Noted for starting strong in games, disappearing for a while, and then coming back. An executioner in one-on-one coverage. Personal issues surrounding women.

8. James Madison, Running Back. Think Danny Woodhead, but shorter and in silk stockings.

9. George Washington, Possession Receiver. Slow, but tall enough and wily in finding the holes in coverage. Those are his teeth on the ground, not his mouthpiece.

11. Harry S. Truman, Cornerback. Dogged defender; tends to give up the long bomb.

14. Martin Van Buren, Free Safety. A triple-option wonder known as the "Little Wizard," this undersized option qb projects out to safety at the next level. A project, but a promising one.

15. Calvin Coolidge, Fullback. Steady, unspectacular producer. A Jacob Hester type that ruffles no feathers. Described by scouts as "a bit of a dandy:" 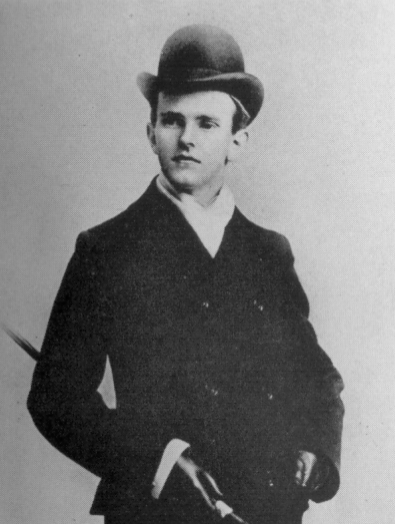 17. Abraham Lincoln, Quarterback. Hangs in the pocket too long and takes too many shots to the head. Teammates may be concerned about showering with him.

20. James Monroe, Tight End. A team man whose presence in the locker room engenders good feelings all around.

22. James Buchanan, Offensive Guard. A solid prospect physically speaking, but showed limited ability to adapt to new schemes in his time in college. Is totally gay (not that there's anything wrong with that.)

23. George H.W. Bush, Defensive End. Only performs well against shorter opposition; allows others to be flattened on blocks without providing assistance. Vomits under pressure.

24. John Quincy Adams, Strong Safety. Tenacious defender whose limited athletic ability is made up for by fast recognition skills and toughness. Turned down scholarship offers from every SEC school, for some reason.

25. Thomas Jefferson, Linebacker.  A solid pass defender who sometimes reverses field for no reason on the run. Unusually spurned offers from major D-1 programs to attend an HBCU. 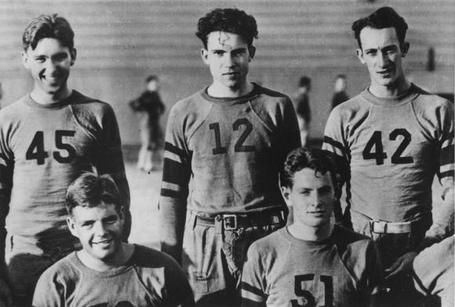 27. Richard Nixon, Quarterback. Master of the pump-fake, but often too clever for his own good. Locker room cancer. Ran up scores in games against Laos Technical College and Northwestern Cambodia State while vehemently denying it. REMINDS US OF: Jeff George.

28. Ulysses S. Grant, Running Back. A battering ram of a running back. Rumored to have played drunk and gambled on games.

29. Andrew Johnson, Quarterback. Can't read defenses (or anything else, for that matter.) Reminds us a lot of Tony Rice.

30. John Tyler, Punter. An excellent punter, but personal issues (has 15 children already) could make him a dicey pick for any team with a draft pick.

31. Rutherford B. Hayes, Quarterback. Was named starter in controversy that doomed his career at Arizona State. Reminds us of: Sam Keller.

32. Jimmy Carter, Cornerback. Good skill set, but allows opponents off the line too easily and runs out of gas early in games.

33. Zachary Taylor, Quarterback. A first quarter QB at best, and product of the unusual "Whig Offense." Fondness for drinking milk during games will catch up with him at this level.

34. Millard Fillmore, Quarterback. UFA only if necessary. A bench player at best. Unnatural obsession with soup may threaten all he hopes to achieve as a person.

39. Andrew Jackson, Linebacker. TB positive, per draft rumors. A cancer in the locker room. Spit up blood from old gunshot wounds for junior and senior years. Will be taken by the Redskins in the first just to be ironic.

40. George W. Bush, Safety.  Questionable football smarts; once ran out of tunnel for football game and then ran to women's softball field where he began tackling a visiting squad without warning. Not the best in the film room. Excellent conditioning; offseason regimen described by others as "torture." Laughable skills as a punter. 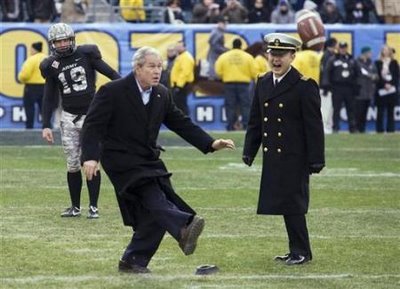 41. Woodrow Wilson, Quarterback. UFA at best. Wife may have played quarterback in his uniform at Princeton while he was out with injury. Urethral deformity may scare off some teams.