Oh, come on. YOUR UNIFORMS ARE ALMOST BLACK AND WHITE. 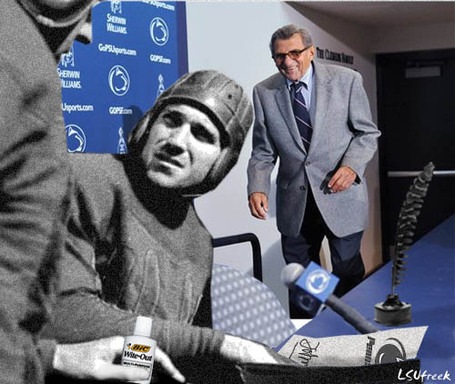 Though Penn State hasn't had a glitzy day recruiting, Joe Paterno is more than happy with his recruiting class. You could even say he bordered on ecstatic.

"Eh, whaddya, ahhh we'll see how they turn out."

5'11, 185 pound defensive end Johaan Van der Faas, the "Dutch Oven" out of Manhattan PS 12, sent his telegram to Paterno early this morning and was the first Penn State recruit in on National Signing Day.

"I was Harvard-bound, but father going to Kansas City with a gin-soaked floozy and leaving mother paralytic with the vapors has me bound to my footballing skills," said Van der Faas in an interview at his stylish Manhattan brownstone. "I have suffered many the fate of a young Manhattoan: abandoned on the shores of rocky fate, and dependent on my skills alone to survive in a cold world."

"I shall play the spinning fullback if they need me to."

This was followed up by commits from several other recruits targeted by Penn State. 185 pound tackle Steiny Horricker of Queens Boys' Town joined the Nittany Lions by way of public bus earlier this morning. Known for his physical play and a somewhat checkered past, Horricker was present but not talkative in a brief encounter on campus.

"Youse guys didn't see me, and you won't be seeing me, even when youse sees me, okay?"

Horricker then asked for directions to the nearest YMCA, where he wanted a room, a hot plate, and none of your peekin' into his business.

The most intriguing case reported late off the back of a dusty pony: Cale Tracker, the rough-and-tumble wingback from Laramie Wyoming Paterno unearthed when he viewed the young man's cow-tackling skills at a traveling rodeo circus.

"I had to get a wiggle on to make it by sundown, but if the ride through Ohio didn't put ol' Roustabout into the glue factory nothing would! I can't wait to play for Coach Joseph Paterno, as I've always respected both the Eye-talian people and the bespectacled."

He did have one reservation with the proposed plan for his career with the Nittany Lions.

"Coach mentioned something about me contracting the Spanish Influenza and dying in two years to serve as an inspiration to my team. I'm not too keen on that, but I'm a wait-and-see kind of fella anyway!"

155 pound quarter-back Arsene LaFollette of Andover Academy, aka "The Ascoted Assassin," was a surprise, however. He credited family as a key factor in his decision making.

"I have impregnated a Jewess, and must flee Massachusetts post-haste."