Let it be noted that we do not endorse anything about Zeljko Raznatovic at all, ever for any reason. He was by all accounts a psychopath, a kleptomaniac, an asshole, and a racist mass murderer. (Not like one of those mass murderers who believes in rights for all, because at least they're fair about it.) He's a dick, and let's get that straight from the start. It should be one of the great rules in life that you don't get shot in the eye if you're not a dick, because that is exactly what happened to Raznatovic in 2000, and only the Harvey Updyke contingent of the Serbian population mourned his death.

Now, that said? HOLY SHIT THIS IS AN AMAZING PHOTO. 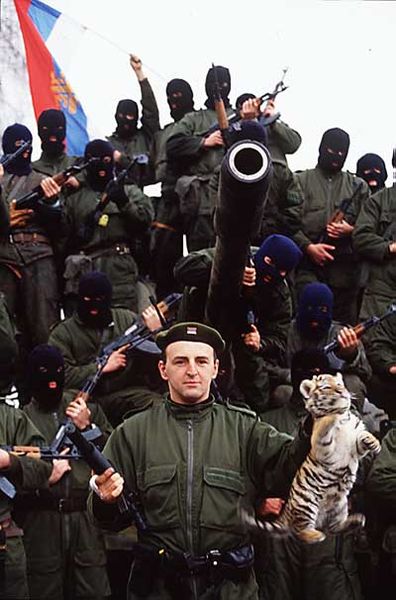 "These are my friends, and my guns, and oh yes tiger." The tiger's just an afterthought there, like "Oh, hey, Zejko, you want this, too?" And then he's like, "Oh shit, I almost forgot him! AWWW KITTY."

(For a real war hero, take Roy Benavidez. For the rest of the DV, please proceed.)

Holly: "Whiskey tastes like hardship." This fine piece of writing has been making the rounds this week, and it makes mention of one of our favorite libations, the whiskey smash. In a sharp turnabout from our last voyage on the good ship Digital Viking, it is not donkey-ass cold and miserable in Georgia, and your three editors find themselves in high spirits and in need of still higher. To that end, I turn to my preferred variation on the drink: the peach bourbon smash. 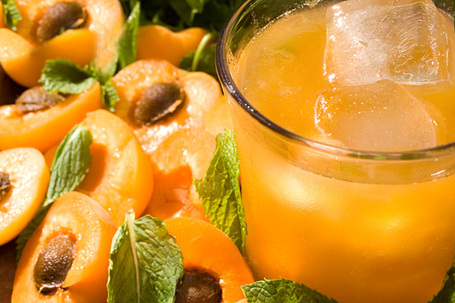 (These are apricots. Those work too. STONE FRUIT MEANS SHIT'S GETTING WARM, MOTHERHUMPERS.)

There are recipes that call for the whipping of superfine sugar and vermouth and all sorts of other weirdness, but we like ours easy: Bourbon, fresh peach slices, simple syrup, muddled mint, and ginger ale. Smash about in an old-fashioned glass, consume, make another, and spit in the teeth of this malingering bitch winter.

Doug: My mom grew up on a farm, so whereas some people might be turned off by a beer brewed on a working farm that sells eggs out of its executive offices -- they don't call it a "farmhouse" ale for nothing -- that stuff's right in my wheelhouse. And if mom's farm had been responsible for brewing Saison Dupont, I'd probably be learning the family business right now rather than killing eight hours in a cubicle every day. It's got some bite to it, but it's a beer for people who want their brew to taste like something found in nature -- you know, beer -- rather than whatever chemicals Coors is claiming to have pulled straight out of a mountain stream these days.

Orson: Corn Likker. We're reading The Wettest County In The World, and the process of reading about it over and over again reminds me that 'shine never really gets its fair shake. Shake is the operant word: if you've had real moonshine, it should harm you initially, and then back off like the wasabi of the barshelf, vaporizing into your bloodstream and leaving only a running nose, red eyes, and a swimming head. It is a beverage for those who want to get blistering drunk by approaching the Alcohol Sun and pressing their faces on its hot surface. The American baijiu for the Drunken Master, and found best by actually knowing someone who's brewed it more than once, and who has never blinded anyone (permanently) in the process of making it.

PROCEED WITH CAUTION: excessive consumption may have you running blockades in souped-up Packards and stumbling up mountain paths in the middle of the night following the scent of sourmash. (As if you weren't prone to doing this anyway.)

I'm in Paris on business this week, and, when I come over here, I always get a sandwich made with real Spanish ham at the shop near my hotel.  (Yes, I know I'm in France, but my circuit doesn't take me to Madrid).  This stuff is amazing -- exactly what pigs were born to do.  Unfortunately, the real stuff is cured using a time-honored process that does not meet USDA muster, so you are not supposed to bring any home.  I think many people try to do so anyway.  There's a version available in the US that is *almost* as good and well worth tracking down if you've never tried it.

Doug: Stipulated: The idea that "the best [insert any category] in the world" could come out of Columbus, Georgia, is almost a little too surreal to contemplate. But no joke, the chicken wings at B. Merrell's on Veteran's Parkway in Columbus are the best on the planet, and this statement has been confirmed by multiple non-Columbus sources. The skin is so crispy it could've been prepared in God's own deep-fryer, and the sauces, particularly the sweet Caribbean sauce, would win global chemistry prizes if the Nobel Committee would just take notice of pubs stashed away in nondescript mid-sized Southern towns. Seriously, come down here and try 'em -- you can crash on my couch if you need to -- and if you don't agree that they're the best wings ever, I'll berate you all the way to the airport for being an uncultured boob who doesn't know the first thing about deep-fried poultry, but I'll pay for your airfare back home. A man's word is his bond and all that.

Orson: Fries cooked in duck fat. Come at me, Gout-bro! 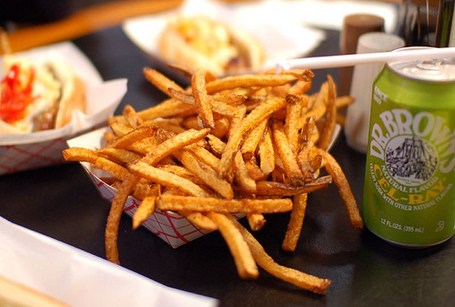 Unnaturally golden chunks of crispy starch forged from the magical marriage of duck fat and potato, and everything good about the universe in a single bite of pure evil. Eat a serving in the presence of a certified nutritionist AND THEY WILL DIE INSTANTLY.

Holly: If you're following along with my #subprimestripper storytelling on the twitters, chronicling the neverending saga of my roommate attempting to date an exotic dancer/grifter she met at a gay bar, you will understand immediately why Fearless Leader thinks I need a (bigger) gun. But where's the fun in blowing a hole in a stripper (NOT! A WORD.) if I can't do it with sparkles? This is Atlanta, after all, and such a mission calls for the Rainbow Brite Ammo Loader Kit: 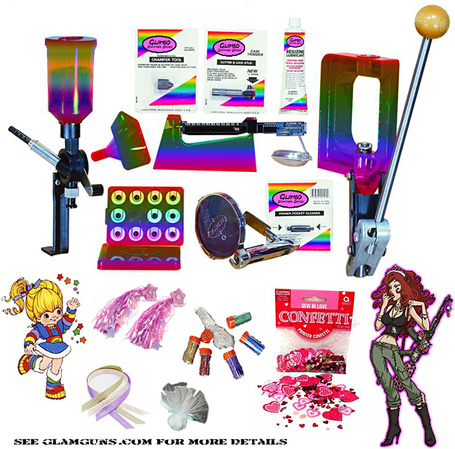 Doug: You know why America is awesome? In most countries, building demolition is a task handled by grubby construction workers in hard hats, or the occasional suicide bomber. In America, starting with the implosion of the old Dunes Casino in 1993, it became a tourist attraction. And if you're gonna invite all these people to watch, why not make it part of a pyrotechnics show, because the only thing better than explosions is MORE EXPLOSIONS:

Orson: Lemmy on videotape-quality footage running over rollerbladers and then driving drunk as hell off a cliff qualifies as a combustible any day on this website.

As we noted earlier this week on the tumblrs, the rawkface of Dave Grohl is so very strong indeed.

Doug: Here's how you know you have ginormous balls: When the Air Force asks you to test-pilot a plane built out of a superstrong magnesium alloy that's designed to take out enemy bombers by ramming into them in mid-flight. Gentlemen, ladies, I give you the Northrop XP-79 "Flying Ram," one of the rare instances in which the government didn't even try to disguise the insanity of what it was doing. 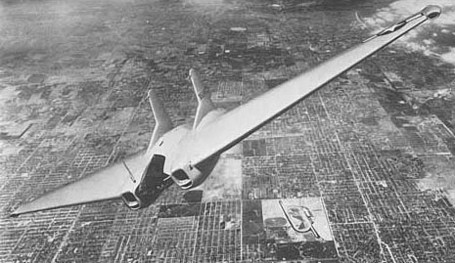 And oh, by the way, the pilot flew the XP-79 from a prone position, so basically you were diving head-first into enemy aircraft at 20,000 feet. I imagine that some pilots might find that to be an absolute gas, though they're probably the same people who watch Gen. Jack D. Ripper's character in "Dr. Strangelove" and think, "Man, why can't we have a guy like that as the Secretary of Defense?"

Orson: Inspired by last night's episode of Archer, we had no choice but to choose the only form of transport that intensifies the feeling of being alive by a factor of three thousand times sexy, the airboat. You don't even need a trailer!

All three of those men and the guy holding the camera are LSU fans, and this is an inevitability you must accept. 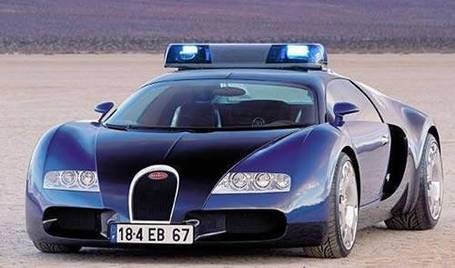 Doug: Every year I write letters, and every year the NFL tells me to stop contacting them, but screw it -- after this year's craptacular display, I'm stepping up the campaign: Kool Keith for Super Bowl halftime show.

I mean, the man writes rhymes that are kind of like what Eazy-E would've come up with if he'd been less inhibited -- Patrick Taylor wasn't wrong when he described Keith as the aural equivalent of a night at the Clermont Lounge -- then spits them out with the alacrity of a man who does 500 push-ups each morning with his tongue. This stream-of-insanity style can make for a difficult listen, sure, but if you can't stomach the occasional reference to "gonorrhea red stop signs," or a guy entreating his girl to put on a motorcycle helmet before they get busy, maybe the "pornocore" genre of hip-hop (which Keith basically invented with Sex Style) just isn't your speed. And no, the rumors aren't true that he did time at the notorious Bellevue psychiatric hospital, but it wasn't for lack of trying. Yes, Kool Keith for halftime show, and let's make "The Mack is Back" the new intro song for "College Gameday" while we're at it. I mean, could it be any worse than Kenny Chesney?

Holly: By our trusty Digital Viking calendar, it was about this time last year when we started desperately cycling through the entire Stanton Warriors catalog as defense against seasonal depression. Here they are again to save us, bless them, this time with Turn Me Up Some. Listening to this while doing sprints is like activating that flashing Super Mario invincibility star right up top your head:

Orson: Since we're feeling so sunny day redneck with the burst of warm weather here, a proper redneck eulogy is fitting. Ed Hinton's piece on the death of Dale Earnhardt is short, simple, and just so in all the right ways in summing up the hard, fast, and complex life of someone who couldn't be summed up in a narrative, but rather the way you saw him on the racetrack: a blip here, a flash there, and then gone. You want good sportswriting in the prototype? That piece is a fine enough start, with form following function and execution for miles.  (via)