FULMER CUPDATE: WASHINGTON STATE DOES WHAT THEY DO, SON

Share All sharing options for: FULMER CUPDATE: WASHINGTON STATE DOES WHAT THEY DO, SON

Boardmaster Brian has taken a break from using his Reggie Nelson-ish genitals as a speed bump for busy streets in his city to bring you this week's Big Board. Scoring and charges follow. 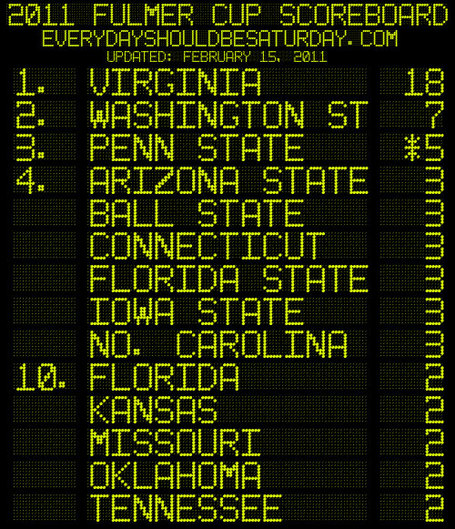 WASHINGTON STATE PRESERVES THEIR REPUTATION AS A PERENNIAL PERFORMER HERE. Pullman's management may have changed several times in the past decade, but their quiet and steady production in the Fulmer Cup has remained a constant. The Cougs' attempt to duplicate their constant presence in the background of Gameday in the Fulmer Cup is a success already: last week the felony residential burglary and second degree theft charges for redshirt freshman cornerback Tracy Clark scored an even six points for WSU. Clark stole a a laptop from another student in a dormitory, proving yet again that young theft-prone college football players are to laptops as the fly is to the pitcher plant. (Clark will now likely transfer and win a Heisman Trophy. Just watch.)

The Cougars added some balance to the resume, though. The light-hearted marijuana possession arrest of their starting running back, James Montgomery, adds another point to the total. (Via.)  Montgomery was a fifth-year senior but is petitioning for another year, so he will count in the Cup standings until his appeal is denied. (If it is, the point will be removed.)

For the moment two felonies (three points each) and one misdemeanor (one point) earns you seven points in the Fulmer Cup, Washington State.

TENNESSEE CONTINUES TO BE HAUNTED BY THE SPIRITS OF A GRUMPY INDIAN WITH THE POWER TO CREATE STRANGE INJURIES AND CRIMINAL BEHAVIOR. Within a week of losing Janzen Jackson for the moment to some undisclosed mental health issue, the Vols' may have issues with another safety, proving that General Neyland beat Native Americans for fun and then bragged about it in the afterlife while wearing a Redskins jersey and laughing riotously at a showing of Dances With Wolves.

Freshman Brent Brewer, the safety who started the last six games of last season in 2010, is accused of one count of misdemeanor domestic assault after allegedly choking a woman in his apartment.  The normal one point misdemeanor will get the "hitting girls" bonus here, and result in a two point score for the Volunteers. We remind all abusive men out there dating crazy women of the Chris Rock "Shake, don't choke," rule. It's still abuse, but if you're an abusive man it will be about mitigating your insane desire to both date insane women attracted to you and the damage you will do to both of you in the process.

BALL STATE BRINGS YOU THE RARE COACHING FULMER CUP POINTS. Terry Lantz of Ball State, you could plead guilty to DUI, or you could just let your face do the talking for you. 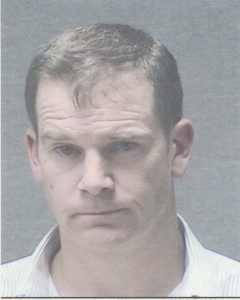 Ah, the classic "Damn you, Applebee's 2 for 1 night" face. The Ball State safeties coach was popped for DUI over the weekend and blew a 0.16, good 'n hammered by any measure of the term in the empirical and anecdotal senses of the words.

"While talking with him about why he had been stopped, I could smell an odor of an alcoholic beverage coming from his person and noticed that his eyes were red and glassy," Hellis said in the affidavit.

The basic DUI gets you two, but a bonus point for coaching staff miscues gets the sum total here up to three points for Ball State.

FLORIDA STATE, SON? WITH THAT KIND OF DETERMINATION YOU BELONG AT GEORGIA. Florida State running back Jermaine Thomas earns another citation for a suspended license, his second in a week. A bonus point for stupidity will be added to make the paltry misdemeanor charges a three point play for the Seminoles, and transfer papers will be filed on Thomas' behalf for a spot at Georgia, since only the Bulldogs are allowed to pile up meaningless points based almost exclusively on minor traffic violations.