ROCK HILL, SC (AP)-- In a shocking turn of events this morning, number one-ranked high school football recruit Jadeveon Clowney spurned offers from the University of South Carolina and Clemson and announced his commitment to what he described as "this big-ass sandwich here." 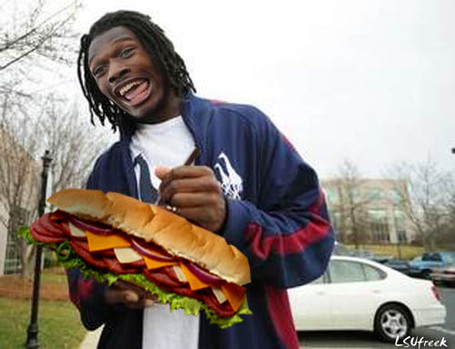 "I have consulted with my family, my friends, and my community, and I'd like to thank them and say I've got a lot of things ahead of me in life, but this big-ass sandwich has to come first."

Clowney made the announcement in front of a crowded auditorium at South Pointe High School in front of 400 of his classmates and numerous assembled representatives of the media. His mother stood proudly at his right shoulder, and patted Clowney as he spoke.

"I was taught never to stop until I'd finished something. And right now, I haven't finished this sandwich."

The sandwich entered the recruiting race as a late, unplanned addition sometime late Monday night when a hungry Clowney traveled to a local sandwich shop for a meal.

"I did not anticipate the level of commitment this sandwich would require while I was ordering it, most especially not when I requested triple meat and double cheese."

When asked what the sandwich offered that Clemson and South Carolina could not, Clowney smiled and attempted to explain to a stunned crowd why he made his choice.

"Just look at it. There's all these meats, just hangin' off the end, and this cheese, and tomatoes, which I don't normally like because they get the bun and the meat all wet when you bit into 'em, but that's just how good this sandwich is. The tomatoes don't even bother me. Additionally, I'm drawn to its generous stacks of cheese, lettuce, and what I think are banana peppers, or maybe old jalapenos. It's hard to tell, but I'm still eating it."

Clowney said he had no timeline for finishing the sandwich, but guessed that he might finish it sometime on Wednesday morning. Clowney suggested those interested in his school choices come back on "Wednesday morning-ish" to see how things were going with the sandwich, or "maybe just drop by and see how it's going later that day if I'm not around."