HAPPY VALENTINE'S DAY! Coach Boom wants you to have a wonderful Valentine's Day, and to reach out to that special someone in your life, look them directly in the eyes, and then bleed on them like you love them. 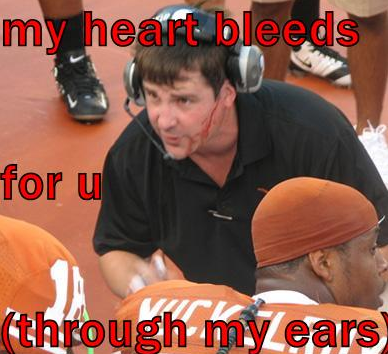 Houston Nutt also loves you, though that love is conditional and based on your ability to make it through junior college and find room on Ole Miss's roster. Gene Chizik loves you, too, and if you'll pick up a package from your pastor you'll see just how much his love is worth to you. That's three men competing for your affections, which is good because that bastard Rick Neuheisel is in Mexico with some floozy and never coming back, and it's about time you accepted that and moved on.

HE WILL ANNOUNCE BY EATING A BAG OF CANDY HEARTS AND THEN COUGHING UP ONE WITH THE NAME OF THE SCHOOL ON IT. The last untied shoelace from Signing Day gets tucked neatly into a bow today as Jadeveon Clowney, the number one rated defensive end in the country, announces his decision live on ESPN at 10:30 a.m. EST.

In fifteen games in his senior season Clowney had 162 tackles, 29.5 sacks, 29 tackles for loss, 11 caused fumbles, 6 fumbles recoveries, 43 quarterback pressures and five defensive touchdowns. He also runs a 4.5, is conservatively listed as 6'5", 230 pounds, and happens to be real good at football, and thus the hubbub. The three schools in competition for his services are primaries South Carolina and Clemson, with Alabama looking to show in third place.

GABA admits that even if Clowney is academically suspect--and by all indications he may very well be--sending him to get his grades up at Hargreaves or wherever he goes with his commitment is the kind of problem one likes to have.

NO, THAT IS NOT TIM TEBOW. HE'S A PURE HIGH TENOR. Though it does look a lot like him. We know, everyone likes Mumford and Sons, but when we see Bob Dylan and ten guys with acoustic guitars on the same stage all we want is some soap and a flamethrower. In additional bizarre Grammy/college football news, Justin Bieber is a huge Mike Gundy Rant fan. Don't make us love you, anointed stealthy deflowerer of our nation's young females.

MORE EVIDENCE THAT EVERYTHING IS FUNNIER WITH DICKS. Thujone's art is really the only thing that can properly convey the emotional plane crash of Texas' 2011 season.

COMIC BOOK GUY IS AGAINST YOU, SAM KELLER. SURRENDER. The long threads of the Sam Keller et al. case against EA and the NCAA lead to some bizarre places.

This could be disastrous for our time-travel adventure/fantasy script starring 1976 Barry Switzer going back in time with three shotguns and a 24 pack of beer to lead a group of Aztecs into combat against the Spanish conquistadores.