From the future, and you know it. 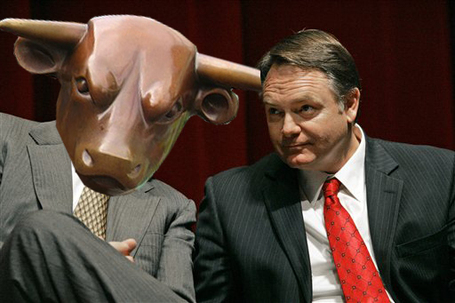 OXFORD, MS--(AP) The NCAA has decided to allow the admission of Beefmaster Jenkins to Ole Miss, according to sources at the NCAA and at the University of Mississippi.

"Dangtangity nabbit tarkfarkus," said Nutt when reached by phone at his home in Oxford on Monday night. "GIGGITY."

The controversial recruit out of Texas has never played football before at any level and has never attended school. Despite these limitations, Nutt and his staff moved Jenkins to the top of their recruiting board after a viewing of his appearance in Jackass Number Two.

"I'll tell you, I've never seen a bull rush like his. The power and explosiveness is off the charts," said one scout who wished to remain anonymous. "He is a cow, though. He should be that big. I'd be concerned about him in zone-blitz packages and coverages, and also when the sun makes strange shapes on the ground in late afternoon games, because that could cause a stampede situation."

"If Beefmaster Jenkins can qualifty--and with a classification as learning disabled, we believe he can--then we look forward to him becoming a valuable member of the community. This is all hypothetical, however. We will have to examine the scholarship numbers, though."

Nutt believes he has an answer if Jenkins is on the outside looking in at the end of the signing period.