WOULD YOU BE INTERESTED IN THE FACE AND BODY OF A CHAMPION? Of course you would, Kansas. Of course you would. How could you resist the call of of this silky modern lover? How, we ask, when he points in your direction so confidently? 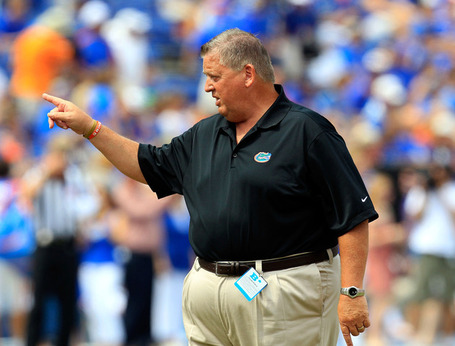 Four Super Bowl rings, Kansas. FOUR. Just imagine four Super Bowl rings coming to coach you. There's Tom Bradyness all over him, the very essential oils of a winner pouring from his veins. He took the Notre Dame program from the depths of the Willingham era to victory in the Hawai'i Bowl, and even appeared in two BCS Bowls before taking a job at Florida. FLORIDA HIRED HIM. They don't just roll out job offers to anyone, right?

Success is a big challenge, and you're going to need a big man to take on that big challenge. (They don't come much bigger than Charlie, and you've already gone through the only one bigger than him.) We'll miss him, but clearly Gainesville is too small a ranch for this bull. He needs wide open spaces, Kansas. Give them to him, and share the freedom of the plains with a beast who needs you.

ARIZONA STATE SEEMS LIKE FUN. So while we were in meetings yesterday, Twitter was like "OMG June Jones to ASU" until around 3 p.m. or so when Twitter was like "WTF no June Jones to AZ State lolbbq." Jones' agent, Leigh Steinberg, chimed in himself to say how weird the revocation of an offer at the last second was, and in a snap the June Jones era was over before it had begun. The likely cause? A fan and booster revolt after news leaked of Jones' recruitment by ASU donor Verde Dickey, who happens to be an SMU alum who did exactly what you suspect rich dudes do: "Hey, I know one guy who does this, and you should hire him." Then everyone freaked out because Arizona State keeps hiring coaches who were really cool in 1993, and now they're stuck with the same slate of candidates everyone else has and flailing. ASU sounds like way less fun than you might think it might be.

RIP, FRED THOMPSON. The freshman Oregon State defensive tackle collapsed yesterday playing basketball on the court on the campus in Corvallis, and was pronounced dead shortly afterward. Thoughts and condolences to his family and to the Oregon State community, and 2011 is horrible and let's be through with it.

TOM HERMAN WOULD BE COOL. Ohio State is looking at a number of possible coaches to fill out Urban's staff, but one of the most interesting ones would be Tom Herman, Iowa State's genius-boy offensive coordinator who you may remember from his time at Rice. He scored points frequently at Rice. This should probably be his whole resume, but he also puts "member of Mensa" on there to let you know he lacks social skills, too. Gotta be well-rounded AND honest when working the CV, which is why we put "has not worn tie in three years" right at the top of ours next to "Taxidermist's assistant, 2000-2002, shed in Ely, Minnesota. References not available, as Old Bill the Deer-Stuffer is dead and never liked us anyway."

JUSTIN BLACKMON LIKES MONEY. He's going to leave, and why the hell not at this point since his quarterback is going to retire soon anyway. (BECAUSE HE'S OLD OMG BRANDON WEEDEN IS OLD GET IT.)

ETC: If Penn State hires Ken O'Keefe, oh boy oh boy oh boy. Yes, a Brooks link, but one from yesterday that bears inclusion to remind you that Nick Saban would skin you alive to make a field goal. Smart Football sings the praises of the two tight end set and the rocket toss. Yes, that 14 year old, 6'5" freshman DOES seem suspicious.

AFTER THE JUMP HAIL FREEKERY. No, we won't explain. Just click.