BETWEEN THE SYNAPSES: THE ELOQUENT OKLAHOMA STATE MAN-APE

Share All sharing options for: BETWEEN THE SYNAPSES: THE ELOQUENT OKLAHOMA STATE MAN-APE

As the regular season draws to a close, Between the Synapses turns a curious eye to Stillwater, where one special Oklahoma State supporter captured our attention. What could this gentle man-ape, so excited by victory while most likely alarmed by the prospect of seeing the Cowboys excluded from a shot at the championship, be thinking? 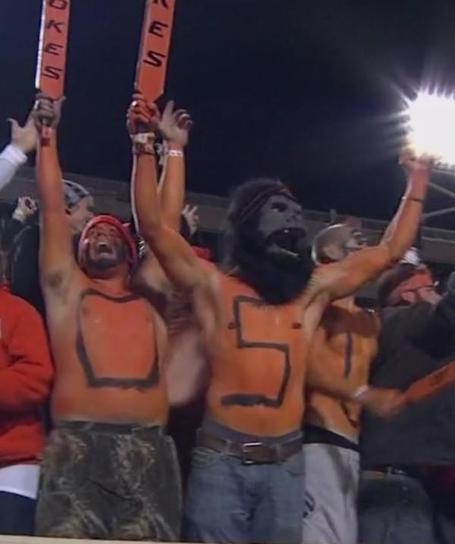 Huzzah! Onward to vict'ry most sound and thorough, that we might hurl taunts towards our enemies intrastate and claim dominion over their very psyches! O, the continent may keep polo, the fox hunt, even the noble pursuit of serf-mounting; this, truly, is the sport of kings. Is not the trajectory of the ball from the farthing-back's hand reminiscent of an arrow set forth by an Ojibway's bow aim'd for the heart of the mighty jag-u-ar? Does not the thundering of the proboscis-tackle's collision with the pence-back recall the jarring gallop of a pachyderm on the grassland of the Ethiop?

Vexment, then, that our squadron so proud and honor'd must do battle not on the field-turf but, rather, 'mongst the body politic, an assembly ironically most...impolite? (I do enjoy a splendid turn of phrase so!) This business is unseemly, parading about for - it pains my tongue to even form the syllables - reporters, in the manner of mongrels at the operahouse pleading for but a scrap of bread. 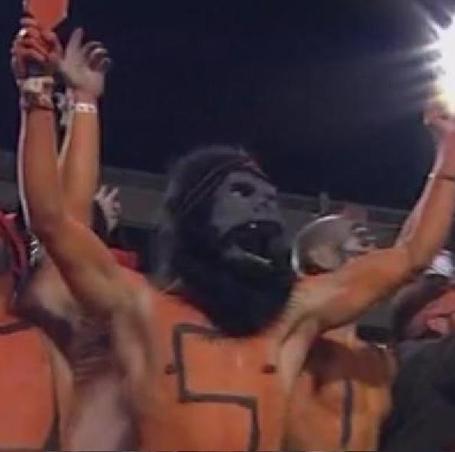 These accurs'd colonists and their bedeviling infatuation with democracy renders them subject to the whims and fancies of miscreants, apparently chosen at RANDOM by some unseen Mr. Harris! Thomas Bowden? Jackson Sherrill? Ricardo Brooks? Where are the men of peerage, of honorable consanguine lineage? Shall we install a rheumatic cart-ox as head of our navy as well?

On my ninth birth-day, my father, Lord Admiral Eloquent Man-Ape IV, bestowed upon me the keys to our family's most modest and least profitable ironworks and, seizing me by the neck, said this: "Left to its own devices, a commoner is like a portion of hot coal spilt upon the walkway: capable only of wanton destruction for its miserably short duration." He then took his cane and beat me about the head and betwixt my shoulders.

Four years later, I laid the man to rest - in a sealed iron lung made by my factory, now the most profitable jewel in the Man-Ape portfolio. 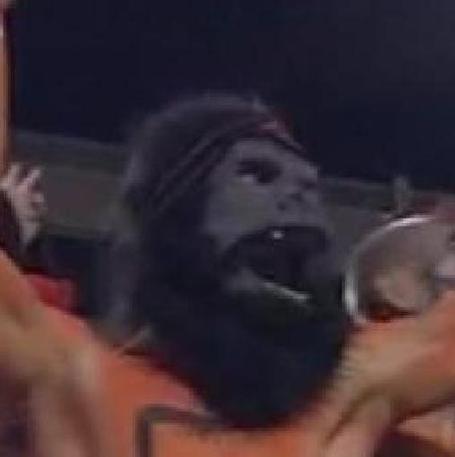 My manservant, Expiate, tells me of the plebeian murmurs of how best to repair the tears and stains in college football's fair garment. "Play-off," he says with fervor. I simply chortle and give Expiate a playful cuffing. These fools treat only the symptoms: voting of a nature so arbitrary it may as well be random, analysis free of standard or logical consistency, Michigan.

None of these pitifully and poorly proposed courses of therapy treat the disease.

Give back to Man-Ape and his few rightly-born equals the unquestioned power to select a champion. Though our company must always remain secret, I can assure you we will include the following gentlemen:

We have sheltered the terrified, illiterate, noxious masses throughout ev'ry upheaval in history. Turn away from your lamentable obsession with the ballot, and we will shelter you again. Such is our noblesse oblige.

Only ours will be bless'd by the gods of Industry and Nobility.