So, SEC Supremacist got married this weekend in in Columbia, Missouri. As a friend of his for about the last 10 years, I got tapped for groomswoman duties, which mostly consisted of being there in a pretty dress and doing shots before the ceremony. I figured while I was there, I'd see what there is to see in our newest SEC town.

First things first: getting to Columbia by air is interesting. Columbia Regional Airport is served by a Delta connection flight to/from Memphis, and this is the only flight the airport serves other than private planes. My flights went from Huntsville to Atlanta, Atlanta to Memphis, and finally Memphis to Columbia. I arrived without incident, but spending most of the day in airports was enough to make me a little stabby by time I landed. According to the "Welcome to CoMo" book in my hotel room, airport expansion is a priority for 2012, so you may or may not find yourself drinking in Memphis waiting for the 2:30 to Columbia like I did.

Getting around Columbia is, for the most part, easy. I-70 and US 63 intersect on the east side of town, with your typical chain restaurants and hotels by the interstate. From the I-70 service road, Broadway will take you into downtown Columbia. The downtown area is easy walking, with parking decks available in several areas.

After the rehearsal Friday night, we headed downtown for dinner. As it happens, the first Friday night of December is something called the "Living Windows Festival," in which downtown shops create special displays/skits for their shop windows and food carts dominate street corners. The streets were a bit overcrowded with lots of families out and about watching dozens of Santas, but a quick "excuse me" kept our group from getting separated. Big points for Columbia here: in a town with 3 colleges that ought to be full of t-shirt shops and bars, families with little kids can get out and have fun too, so bringing the wee fans is an option. The city plans events year-round, including a First Night party and kids' days in the park, so check out the visitors' guides when you get to town.

Speaking of shops in Columbia, ladies: THERE IS A CUSTOM-FITTING BRA BOUTIQUE IN TOWN. I did not see it as part of the LWF, but there was an ad for the Bust Boutique in Welcome to CoMo. I know many of us have bigguns, and this is very likely worth checking out if you're in town for a couple of days prior to game day.

We drove around Columbia a little bit after dinner, and I saw this: 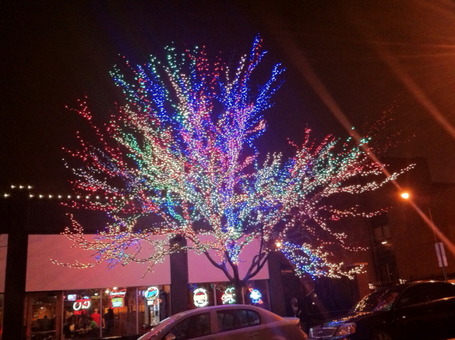 which of course, just warmed the little cockles of my Auburn heart. We passed on going drankin' that night, as some of us began our days before dawn to travel.

After the wedding and reception Saturday night, the bridal party went out to hit the town. We only went to a couple of different places, since we were starting our abbreviated bar crawl after 11pm. After about 10pm, downtown Columbia is bars and late-night food joints, and finding a watering hole is only limited by what type of bar you prefer. We started out in a speakeasy-type bar and wound up in a small but loud college bar. We didn't hear any live acts, but Friday night, some of the party went to a piano bar, and Brandi Carlisle was kicking off her solo tour at The Blue Note Saturday night, so if live music is your thing, you should be able to find something. Beer selection at most places seemed decent, especially on tap, and nearly everywhere went beyond the staples of Anheuser-Busch and Miller that were the hallmarks of Alabama college bars back in my day.

A quick word on bars in Columbia: Last call is around 1. At 1:30, the lights come on and people start getting herded out the doors. This is apparently the law up there, with the exceptions of Kansas City and St. Louis. I guess it's the trade-off you make for not being so limited in beer choices.

Apropos of nothing, Columbia also seems to have an interesting custom-auto culture, as I spotted a rare Lincomino in one of the parking decks downtown: 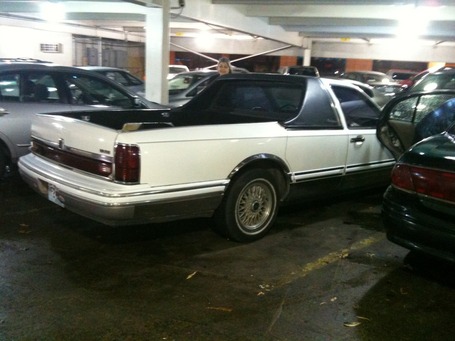 On Sunday, check-out time was well before the flight back to Memphis, so some friends on the same connecting flights and I drove around town a bit to see town in the daylight. Columbia is a pretty town. Driving by the Mizzou stadium is a bit misleading as to its size, as it sits in a natural depression. Mizzou's campus is pretty, with gorgeous old neo-Gothic buildings. Mort Walker, the creator of Beetle Bailey, attended Missouri, and this statue sits out in front of the alumni center: 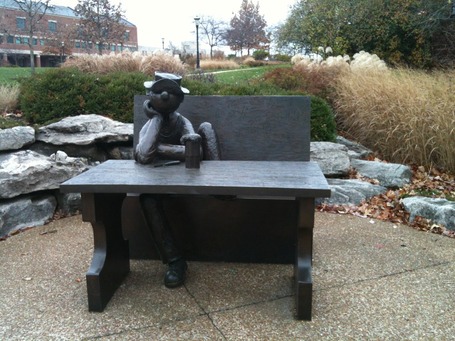 Since we had time to burn, we went to a place called Flatbranch for lunch. Y'ALL. Ohmahgawd. The place is an awesome microbrewery with fantastic food. Our buddy/chauffeur who lives in Columbia was amazed we were able to get parking there--at 1 on a Sunday afternoon. They have about two dozen beers, keep about 10 of those on tap, plus seasonals and short-runs that you may get if you're lucky enough to be there the day they're released. I got a brown ale, which was superb and blurred the line a little bit between ale and stout. My friend got a sampler tray, which comes with six 5-ounce glasses of your choice of beers: 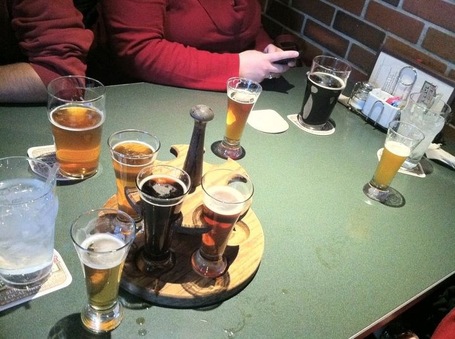 In summation, Columbia is a great town to visit, with good restaurants, an actual bar scene, and nice people. Granted, I wasn't there on a gameday weekend, but I don't think that would detract from the experience. I think they will fit in well with the SEC, although the current lack of a Chick-Fil-A and sweet tea is a slight negative. I look forward to getting back up there. Maybe someone can organize an EDSBS tailgate? In fact, Mizzou fans, you should do that. I know I'll be trying to get back up there at some point and I want to see y'all at your footballinest finest.