Share All sharing options for: GUYS CALM DOWN WE'RE GONNA BE FINE 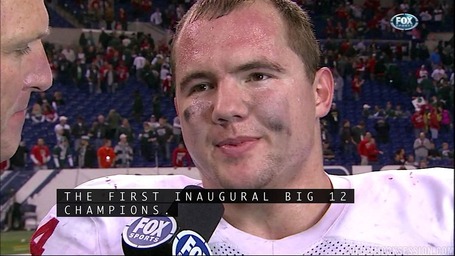 Guys, chill. It'll be fine. You might be an Alabama fan, and panicking about "oh my God, there's no way they could vote in Oklahoma State over us, because that's never happened---[checks 2006 and passes out.] Meanwhile, Oklahoma State fans are busy denigrating Alabama's schedule, pointing and laughing at their offense, and enlightening the general public as to the exact magnitude of Iowa State's unknown powers. ("They'd win 9 games in the SEC, and 10 in the Pac-12, and 19 in the Big East. There aren't even that many games in a season, but that's just how good they are! WE'RE NOT BORING WE SWEAR.")

Stop. It's going to be fine. Sometime between now and tomorrow night, the voters of the Coaches' Poll and Harris Poll are going to shoe this rascally mule. The coaches have staff members filling out their cards for them, and have watched maybe 50% of the games at best, but no, no REALLY: THEY'VE GOT THIS.

The Harris Poll will fix that possible error, though. Composed of a crew of voters who surely have viewed every important game and taken careful notes on the relative strengths and weaknesses of each team, The Harris Poll voters are there to counterbalance the hyperfocused votes of coaches with a more cosmopolitan perspective. Members include:

Dammit. We're all going to die.