Share All sharing options for: OPEN THREAD: HYUNDAI FIGHT THE SUN BOWL, KRAFT HUNGER GAMES SOMETHING SOMETHING PLUS AUTOLIBERTY, HUZZAH 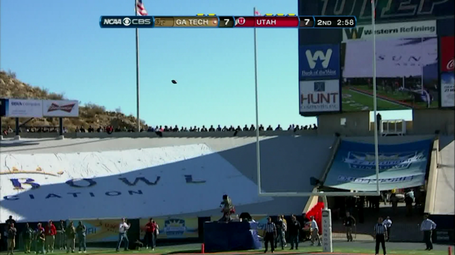 Poor Justin Moore. Even if the football were full of delicious llelo, there's no way he has the leg strength to kick that thing all the way to Juarez. Instead of the merciless wrath of a Mexican drug cartel, he'll have to face the equal or greater vengeance of one Coach Paul Johnson. He's killed before and will kill again, possibly in the middle of a football game this time.

Consider this your gateway drug to the second half of a boring El Paso based football game, one in San Francisco between a 6-6 team and a 6-7 one, and oh hey, there's even a game pitting Cincinnati and Vanderbilt taking place in Memphis (ostensibly in a parallel universe where this kind of thing is desirable). There's not enough hard hallucinogens in any of the three cities combined to make UCLA watchable, but we suspect you'll join us in tuning in to find out none the less.

Finally, congratulations to new SEC debutante, General Dog, on a win for the ages. None of us thought you could do it, yet here we are. A new year, a new conference, a new you!