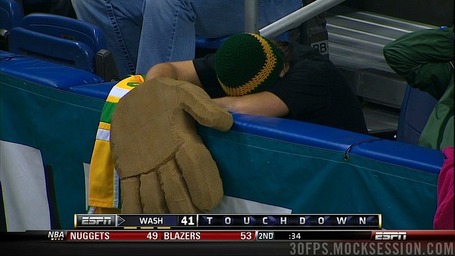 The despair evaporated as readily as the defenses for both teams in the Alamo Bowl, a game of such sugary overconsumption of points-candy that even the most insulin-resistant fan was lying on the floor at the end of the game watching the ceiling spin. The numbers. Jesus flippin' Christ, the numbers. Spielman was on the verge of tears for most of the second half, and could not be blamed. His agony was as real as that of Mike Leach watching Woody McCorvey call a game of offensive football, and should be respected. (He was still ranting about the incompetent defense DURING THE TROPHY PRESENTATION.)

Btw, there was a defensive MVP, an award we assume proves the stout sense of humor of the Alamo Bowl officials. Elliot Coffey, Baylor linebacker, will take the trophy, place it on a shelf, and hope no one asks about how he got it. Meanwhile, even Oregon fans are grateful for Washington's defense even in games that don't involve them.

TOMMY REES LIKES TO BAKE AND GUESS WHAT HIS FAVORITE PASTRY IS? All Florida State does is benefit from quarterbacks hitting DBs dead in the numbers, though to be fair the story of the second half was Florida State's offensive line playing competently and preventing E.J. Manuel from dying on the field in front of our horrified eyes. We have never seen a play more predictable and yet still surprising than Tommy Rees' endzone INT, nor substitutions more Spurrier-ish than Brian Kelly's random spinning of Hendrix and Rees down the stretch.

$83,000 IS A SMALL PRICE TO PAY TO DODGE A BULLET. Miami's gonna be all right, guys. You know, after their entire roster declares for the NFL this year. :(

WE HAD TO READ THIS THREE TIMES THROUGH. And after those three reads, we have concluded that it is poorly written, vague, AND shameless sausage-story making that is nothing in the grand scheme of things.

DEREK DOOLEY'S ORANGE PANTS ARE CONTROLLING HIS BRAIN AND MAKING HIM ACT LIKE A DICK. We have never understood transfer restrictions, and never will--especially when they involve a sick family member and the desire to transfer to a school that's not even in your conference.