THE BOWL EXPERIENCE IN ONE MAJESTIC IMAGE. 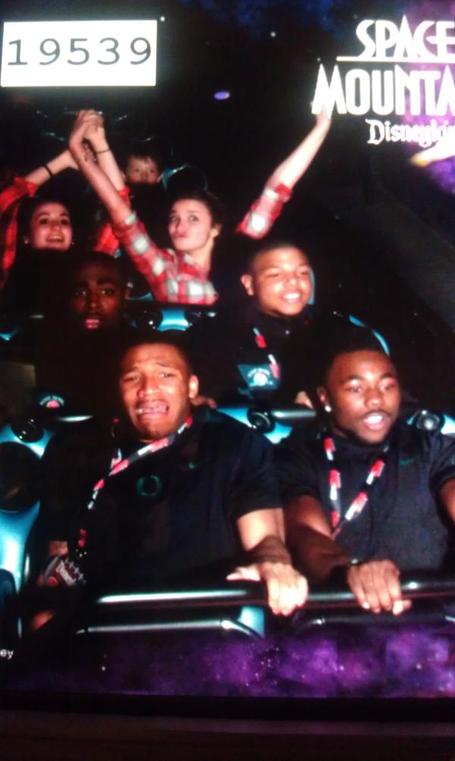 We've all seen LaMichael James suffer injuries--horrendous, grievous injuries. We have seen him boldly charge into the waiting arms of Nick Fairley without weeping. We have been witness to his toughness on a thousand occasions, so let us just assume that the one fear that would break him, the one thing behind the door of his own personal room 101, is a trip on Space Mountain. Everyone has something that will break them. Ours is the closely miked recorded noise of eating and drinking, which would kill us with madness if played on a loop long enough. (Via)

OH FABULOUS PANTS FOR ALL. Teddy Bridgewater was likely instructed to take a lukewarm shower and then turn up the water temperature slowly. Any sudden temperature change would likely fracture him like fragile pottery, since he spent most of the Belk Bowl last night running for his life before taking dual helmets to the ribs. NC State held off a Louisville team willing to do everything but block properly, including double onside attempts, a fake punt, and trick plays all day. They still came up short in a 31-24 loss, but facing Tom O'Brien in a mid-level bowl game is just one way life tells you you're dead on arrival, son.

MEANWHILE, WESTERN MICHIGAN LOSES TO NO ONE. If you lose a bowl game to no one, does Alabama claim the victory? Yes, yes they will. They did run a fabulous trick play, however, and that should count for something. And no, the Little Caesar's Bowl had no LC pizza. Patrons had to rely on the proper contractor, Hungry Howie's, for their pizza needs, and then do what we always do when we get their pizza: stare at their logo and ask why no one has noticed their logo is a decapitated stroke victim with his head on a pizza.

OMG OMG OMG OMG OMG OMG. The SEC 2012 schedule comes up at 10 a.m. We will have some proper form of reactionary hyperventilation when it comes out, but pre-emptively let's just all say how much we hate it.

MMMMM EMBRACE THE NFLAIDSNESS, PENN STATE. If you want to see the best pirouetting around Mike Munchak's ongoing negotiations with Penn State re: the Throne Paterno, StateCollege.com has you so covered.