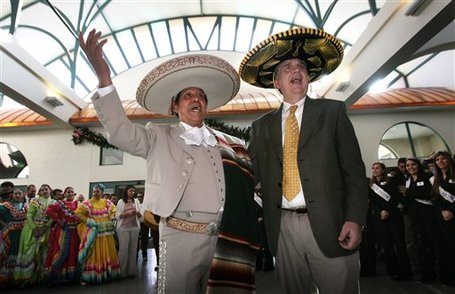 El Paso does things to a man. Makes him sing. Makes him dance. Makes him muscle in on the local narcotrafficantes, depose El Churro, and start running things his way while making sweet love to a senora whose husband is in prison and never loved her anyway. Paul Johnson still doesn't give a shit about anything when he's in Atlanta, but down here, man? Down here it's just different, brother. (Paul Johnson will take over all operations in a week, and then promptly leave them to return to Atlanta without warning, leaving locals only with the legend of "El Feo" and his brief but memorable reign of terror.)

CALLING INTO A GAME FROM SKYPE WORKS AS WELL AS YOU THINK. Let's not say it was phoned in, since North Carolina did show up for about 10 minutes of the Independence Bowl, but before you get overly critical of their effort, consider the difficulties of caring about a game where your interim coach is already out the door, and you're playing on December 26th in Shreveport, and your fanbase has already moved on to basketball season, and you're in Shreveport and the Mizzou mascot pretty much summed up the whole experience by breaking the trophy? We don't approve, but we certainly understand skyping into that game and disconnecting the minute you looked up and saw 31-7 on the scoreboard at half.

(Bonus! You never have to watch John Shoop call a horrendous game at North Carolina ever again, and can instead watch it when Will Muchamp hires him as his offensive coordinator, because that kind of NFLAIDS is exactly what Muschamp wants in an offensive coordinator. This isn't going to work, is it? But hey, a strength dude who gets excited about stuff! That's...normal.)

TODAY'S BOWL BOUNTY: The Little Caesar's and Belk Bowl up on deck, and when you're saying things like 'But it's a quality 7-5," well, that's a special kind of standard adjustment for those starved for entertainment.

Expect a low-scoring, somewhat boring game where both teams try and feel the other one out and play cautiously early on before opening things up later.

BOUNTY POSTED: Pictures of Mark Richt's white beard will be exchanged for EDSBSBUCKS of a massive sum and dubious value.

IF YOU WERE WONDERING WHICH SIDE OF THE COIN THIS YEAR'S OREGON ROSE BOWL UNIS WERE GOING TO LAND ON: Given the choice between "whimsical" or "dystopian future armed duck-cyborg," they opted for the latter, and not the former.