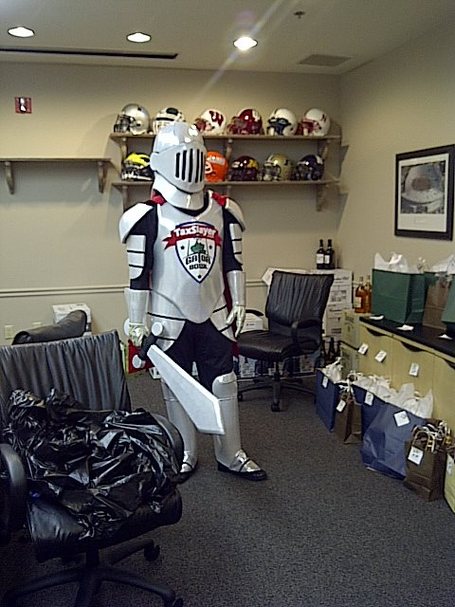 Listen not to the knavish mouths of louts suggesting otherwise, Buckeyes! The Taxslayer.com Gator Bowl is indeed worth a mass at the Capital One Bowl, or whatever other pitiful Orlando-area swine convention you would have been invited to in 2012. Gene Smith foretold this, and acted as all nobles should: conceding nothing, forging ahead with sangroid, and then running facefirst into something before yelling at an underling about it.

There's a lot of good, cynical tittering to be done here. Giggle! The NCAA pitched a minor fit to show its relevance in banning tOSU from all postseason events in 2012, the first year of Urban Meyer's tenure that now just turned into a glorified, season-length scrimmage. Thanks, boys! Love, Urban. The four additional scholarships over the next three years are a little more than roster tweakage for Meyer.

Titters! The NCAA handed down this ruling after the players involved in this played in Ohio State's Sugar Bowl and after the offending coach in the case had committed hari-kiri and taken a consulting job with the Colts. The AD who oversaw this is still sitting there, employed and happily cashing checks, and perhaps could have saved the university some time and pain if he'd followed Tressel into the death machine...but, LOL, there he is, wearing a target as big as Mike Garrett's when he complained about "haters" prior to USC taking it on the chin from the NCAA in 2010.

Guffaws and lulz! Instead of forfeiting a bowl game this year, Ohio State instead embraces the Gator Bowl, the chubby toddler bumfight between the transitional Buckeyes and the Florida Gators. The NCAA may not be cool with this, but to hell with them: if you want to just sit this one out, Buckeyes, please feel free. It'll be a struggle, but thanks to our outstanding kick game a forfeited game with this Florida team should be able to pull out a 9-4 win over the Null Set for a Gator Bowl trophy.