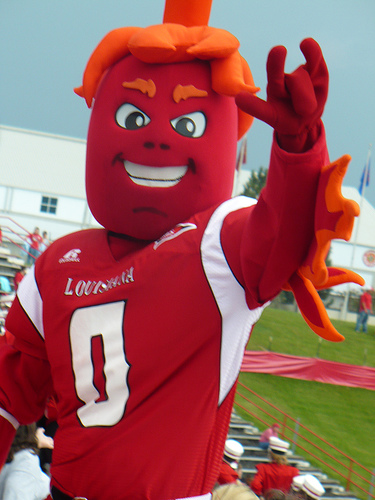 Luke, basically, when we showed him this image: "AAAHHHHHH GET DANE COOK OUT OF HERE." The 35 for 35 series cranks on with the New Orleans Bowl podcast, the final for the opening weekend.

The intro music is a bit easier to ID, even though none of you got that the Famous Idaho Potato Bowl was not Woody Allen soundtrack music (groooosssss) and was instead Louis Armstrong's "Potato Head Blues."

Holly and ours truly tamp down the obvious Ragin' Cajun bias and divert into a quick discussion of how football players should participate in more gymnastics competitions, a ramble into other sports blogs and the second major podcasting error of the series (The Classical DOES have a girl,) and Holly's talking some banjo-censored shit before we talk about the game itself. Who is taller than Brock Osweiler? You'll have to listen to find out. (Answer: NO ONE IS TALLER THAN BROCK OSWEILER.)

Listen here, or in the embedded player below.