Share All sharing options for: A CHIANTI DAN CHRISTMAS

The Alphabetical, after some technical difficulties on our end, is up. In the meantime, let's get some Christmas spirit up in this bitch.

UCLA Athletic Director CHIANTI DAN GUERRERO creeps along through the snow. This is playing.

DG: I don't understand what's so great about Christmas.

Sally: But I do! Can you help me write a letter, big brother? I say it, and you write it down, okay?

Dear Santa Claus. How have you been? How's your wife? I'm asking that sincerely, and not because I may have hugged her a little too intensely on that recruiting trip. Not in a lascivious way, but just because I miscalculated my hug, you know?

Sally: So I've been extra good this year. I won the Pac-12 South! Let's not get technical about it. I have a long list of presents. Please note the size and color of each item. If it's too much trouble, you can always just send money.

Sally: Tens and twenties would be good, because they're harder to trace than C-notes.

P.S. I'd also like another job, Santa, preferably one in the Pac-12. [/WINKS AT ARIZONA STATE]

I'm going to go on a wine tour.

CHIANTI DAN GUERRERO tours two and a half bottles of Barefoot Merlot, but he just says that assuming you'll think "Oh, he did that on some fancy shit" while he actually got plowed on two 1.5 L bargain bottles and watched an assload of House Hunters alone crying in his house. He returns to UCLA, unclear of how he got the Christmas tree in his hand. 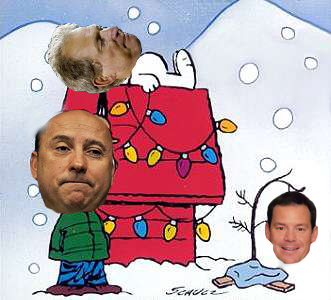 Chianti Dan stands the tree up. It loses to Colorado and Utah, loses by forty to USC, and declares its love for the Washington job eight weeks into the season before falling over. No children gather around it to sing.