The final Factor Five Five Factor Preview of the year comes to you from beautiful Tampa, America's Next Great City of Tomorrow of The Past. It's given us so much: death metal, death metal, Angela Bassett, and Hulk Hogan, the death metal of wrestlers. Speaking of, it's also a great place to die if you speak loudly, too. Both Billy Mays and the Macho Man himself perished in Tampa. (Tony Little, you best watch your ass.)

The Factor Five, as always, determines the winner of the Thursday night game with a mix of five different extremely unscientific factors: Nebulous Statistical Comparisons of Dubious Validity, Mascot, Aura, Names, and Grudges/Scores to Settle/Sheer Cussedness. Holgo's got some cougars to slay, and no, he doesn't need a license.

PROGRAMMING NOTE: We will be livecasting the second half of this game for #CRAIGTRAX. Information to follow in a later post. 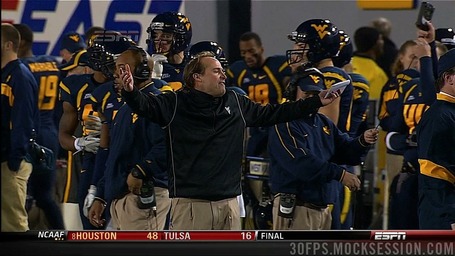 The contradictory evidence continues the deeper you go, but that passing number sticks out the most for West Virginia since .a.) they won't bother running period, much less against USF's superb rushing defense, and b.) If Collaros passed for that many yards, the chances of Geno Smith going for 400+ is so much better than you can possibly imagine. As far as the defense for West Virginia, it's a deceptive situation with a 25th ranked total defense but a 59 spot for scoring D. When they allow points, they just take the whole night off and hope someone hits the reset button. There is no reset button in real life. This is therefore a terrible strategy, even if WVU's offense can usually outscore their mistakes on the other end.

(Note to self: consider naming Dana Holgorsen's offense "the Slutwing" for how often it scores.)

Mascot. Rocky the Bull is a competitor, and we respect that, but there are rules, dude, and the first one is "don't eat your own species." 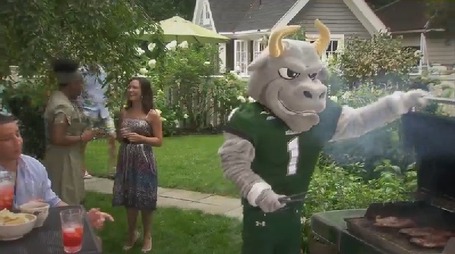 Hello, Clarice. Welcome to my barbecue.

The second: don't put on airs, man. this is Tampa. You know damn well you'd rather be firing off hot bets from the quinella board at Tampa jai-alai, smoking crank under an overpass and having a really real good time, or passing out drunk the mangroves along a causeway. Don't act like you don't love all three of these things, Tampa. We've seen your soul, and it is still wearing a Stussy shirt from 1992.

On the other side, we have the West Virginia Mountaineer. After a brief experiment with a female Mountaineer, WVU opted to go with a more classic version of the WVU mascot. If Brent Hinds was locked naked in a Golden Corral for eight months with only the chocolate fountain to live off of, and then had to escape through the dressing room of a Branson Wild West stage show, well, that is what the current Mountaineer would look like. 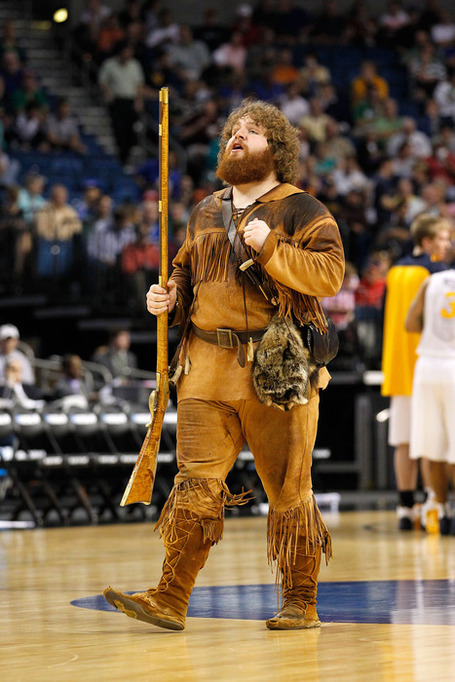 Whatever, body snobs. He's confident, and he's got a gun, and that second part is particularly important here. THICKNESS FOR THE WIN.

Aura. Raymond James in an NFL stadium with a pirate ship, a factor instantly making it three thousand times better than any other NFL stadium. This makes it about 1/5 as good as any college environment, though, and certainly not as good as Milan Puskar Stadium in terms of screeching home advantage. True fact: West Virginia's field comes complete with its own creeping carnivorous evil fog. Tampa's just got a mold-brewing humidity that is only slightly evil, and just kind of lays around going "yeah, you're gonna be uncomfortable. Maybe even have some rashes, pal. I'm totally your worst nightmare, if your worst nightmare is being uncomfortable and having to use ointment all the time."

Stop. We're not even going past "E" on the Bulls' list, because this is the best roster of names in the history of college football. Thor Jozwiak is an alternate, and that is all you need know.

Grudges/Scores to Settle/Sheer Cussedness: All South Florida lives to do is ruin West Virginia's seasons, something they did with regularity in the Rich Rodriguez era. The stakes are somewhat different, but no less dire here. West Virginia must win this game and hope for a Cincy win against UConn to get a three-way tie in the Big East race, a tie broken by BCS rankings. WVU leads the conference in those, and would thus advance to the BCS slot, dollars, and the chance to get the living hell beaten out of them by someone. The upside for USF? THEY LIVE ONLY TO INFLICT PAIN ON WVU HAHAHAHAHAHA. Spite remains the sexiest of motivatin' bitches, man.

EDSBS FACTOR FIVE FIVE FACTOR PREVIEW SUMMARY: West Virginia 3, South Florida 2. Science has spoken, and it says you shouldn't gamble because it is dumb. But dumb things are so much fun, and you should therefore put your money on West Virginia going into Tampa and escaping with the win, and thus needing Cincy to win for BCS dollars in Morgantown. (DOUBLE DOWN: this ensures that UConn will rise up out of nowhere and whip Cincy's ass on Saturday, because this is the Big East and it is never, ever that easy.)