Share All sharing options for: MIKE LEACH PERUSES THE PALOUSE 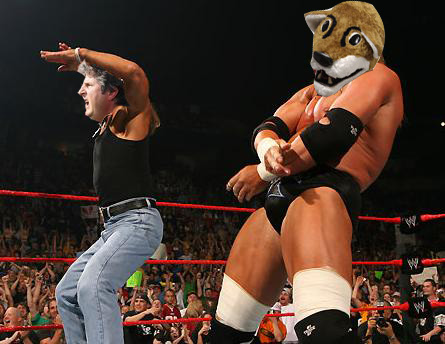 Suck it Craig James: even if the current worst-kept-secret-on-Earth "Mike Leach to Washington State" boomlet falls through, the man himself is at least getting interviews at D-1 programs, and most likely getting one before too long. (FACT: There are currently 83 head coaching vacancies in college football. Or that's what it feels like, anyway.)

Washington State already has Marquess Wilson ready to go at wide receiver and the ninth ranked passing game in the nation, so pieces are certainly there that Leach would find appealing. Washington State is also in the middle of nowhere, thus fitting Leach's M.O. of coaching at places that would most likely survive a nuclear holocaust. The Lubbock of the Pac-12 is a perfect fit, and actually traditional when you think about it. Leach ran former Wazzu coach Dennis Erickson's one-back sets as a young coach, and along with Mike Price probably scores highest on the "chill vibes/pass-first" axis of college coaches.

(See, it's not that Mike Leach isn't conventional. He just had to find a place with the right conventions, that's all.)

UPDATE: NO REALLY SUCK IT CRAIG JAMES HE GOT THE JOB AHOOOOOY MIDDLE FINGERS.