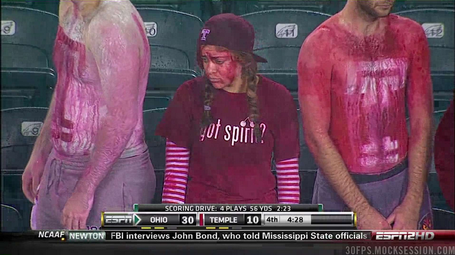 OH SAD TEMPLE FAN. Temple loses to Ohio 35-31, and last year's classic sad Temple fan image is brought to you by Bubbaprog, a non-invite to the Big East's new Conference-USA arrangement, and the arm of Tyler Tettleton, Ohio's QB who threw three TDs and ran for one in taking the lead in the MAC East. Don't ask us whether the MAC East is better than the SEC East right now, as the answer will make us weep. (A: No, but merely thinking of that question is an exercise in insightful sorrow.)

CLEMSON SOUNDS FUN. Tajh Boyd's house was egged by Clemson fans this past Saturday night following their loss at Georgia Tech, and Desmond Brown was booted from the team for the "violation of team rules," and the film looks ghastly, and there's a thin line between love and hate and Clemson football and its fans live on it.


IN A NEW TWIST, A BUCKEYE TATTOOS SOMEONE ELSE FOR ONCE. Tailback Jamaal Berry has been suspended from the Buckeye football program after he was charged with punching a 21 year old in a parking garage last month. There are very few details on how it happened, but we hope Berry's lawyer references the case of "sweet jock-bros just livin'" versus "nerds who need to be punched in the face and stuff."

IN RELATED CASE LAW. Clearly, the Northern Illinois Huskies do not recognize the validity of the aforementioned case law, and have unfairly suspended Jamaal Bass for lighting up a Toledo band member because they were looking all geeky and shit. As a former band member we really should feel strongly about this, and we do because WE THINK IT IS HILARIOUS WHEN BAND PEOPLE ARE KNOCKED DOWN BY FOOTBALL PLAYERS (and no one is hurt) (stop the violence.)

RIVALRY TROLLING HAS A THOUSAND VARIATIONS. Louisville saying their cheer and dance teams have safety issues on the ground in Morgantown, though, is one of the choicest variations of said trolling. We retract this statement if the cheer and dance teams are found to be wearing clothing made of hundred dollar bills, which we really wouldn't blame anyone for attempting to steal in these hard economic times.

THAT IS QUALITY GIF-AGE. Saban as The Jesus looks all too right, though imagining him licking anything but the edge of an axe he's just split the head of an opponent with is an unwelcome and overly intimate thought (and thus quite funny, especially if you imagine Alabama fans assuming Nick Saban's tongue has healing properties. "LICK MY XBOX IT STOPPED WORKIN' NICK ONLY YOU CAN HEAL IT!")

NC STATE FANS SOUND CHARMED BY EVERETT WITHERS. Being finely attuned to college football bitterness as we are, we realize just how much company we have this season. Tom O'Brien's record right now? Well, a perfect 4-4. Gonna be hard to keep it at .500, especially if they win a game, but if anyone can do it The Notorious T.O.B. can.

TEXAS TECH FOOTBALL HAS FINALLY PUSHED THEM OVER THE RIM OF SANITY AND INTO THE DEPTHS. We do agree with one key point of the end of the Adam James Saga: we would never throw eggs at George Strait, either.

HOLLY'S MID-MAJORNESS: Necessary reading as always, because while mid-major football is not the heart of college football, it certainly is something very useful like the kidneys or pancreas or something.