HEY LOOK HOOOOWEEE WE WENT TO TEXAS. College Station, to be specific. Yes, we did write something about it. No, we didn't get to bathe in the melodic stylings of former Aggie QB Jerrod Johnson in person.

The best part about Texas A&M in the SEC will be the Thursday night game when, after getting their ass handed to them for a year or so, someone goes to Kyle Field and walks facefirst into an upset. It's not going to be the norm, but when it happens it'll suck with a deep and burning suckitude. (We hope it's you, Auburn. We sincerely hope it's you.) Speaking of...

ASIAN T-SHIRT FOLLIES NEVR STP. Via reader @breedless, the most essential of Auburn t-shirts from the markets of Thailand. 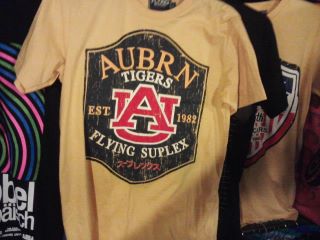 There is a spelling joke here, and you just made it whether you wanted to or not. (I BLVE N ABURN.) Apropos of nothing, our attorney suggested we do a "We Are The World"-style jam for Florida football, preferably one where we have James Bates singing the hook. We are formally taking suggestions for the cast to sing this song, but whatever you mention, it must have Jack Youngblood singing on it with a freshly broken leg. "Owwww this sucks go Florida and fire Charlie Weis ow goddamn my leg this totally wasn't worth iiiiiiiit."

FURTHER TO URBANITIES AND SUCH. Urb's quick on the propaganda, and it's well-wrought propaganda at that. Meanwhile, the enemy is confused by this whole Urban Meijer thing and Pat Forde thinks Urban Meyer is full of shit.

COACHING HOPES SOON TO BE DASHED BY REALITY. Red Cup Rebellion reviews the options scheme-wise for Ole Miss. Bruins Nation lives in fear of an AD they swear is dumb enough to hire Tom Cable, but forgets the upside of Cable potentially knocking "Chianti Dan" Guerrero out in a heated argument. Arkansas State is moving to shore up the contract of Hugh Freeze, and that bitch better include the plushest of tree stands.

THE SUN BOWL LOOKS FUN FOR ONCE. Georgia Tech vs. Washington in the moonscape sounds like a festive desert shootout, but the whole array of the BCS, absurd as its pairings might be in theory, look like solid entertainment up and down the roster. (Save for the title game, which will be a dismal handful of field goals and INTs returned for TDs.) An Oregon/Wisconsin Rose Bowl in particular makes for some serious turf-grinding, and even the obligatory Big East maiming comes with the entertainment of Dana Holgorsen ripping the precious remnants of his skullet out on camera for us to enjoy.

THERE IS NO FLORIDA NEWS. This is the happiest non-news we have typed all year. There is literally nothing to report about Florida football, and in 2011 that is a goddamn joy to say.

WE HAVE A PLAN TO RETIRE AT 50, TOO. You say you have a plan to contain Robert Griffin III. That's cool. Plans are neat. Everyone should have them and floss daily.