CHARLIE WEIS ON THE BEACH

Share All sharing options for: CHARLIE WEIS ON THE BEACH

Charlie on the beach. His phone rings.

Well I thought I'd just come out here and soak up the sun and let the Vitamin D work on me, Will. See there isn't really an easy answer for this. You can ask for pass blocking but you can't pass block when you can't run block and we can't run block so there's no pass blocking, and there's the issue of the technique, which is an issue of the blocking, which goes back to technique, which is rooted in philosophy. I think we just have to work on what we're going to work on, Will. You know, in the NFL they'd--

I DON'T GIVE A RAT'S ASS ABOUT THE NFL. Goddamn, Charlie, they can't defend the veer, that's how butt-dumb most NFL people are. Jim Caldwell is a head coach in the NFL, Charlie. JIM CALDWELL. That man's so stupid he'd hear a strong fart and break out a kite. He's so stupid he'd hang mistletoe over a rat trap. Jim Caldwell is so stupid he thinks Curtis Painter is a bad quarterback because his name isn't "Curtis Quarterback." Jim Caldwell thinks the taste of orange juice after brushing your teeth is one of life's most delicious flavors. Jim Caldwell is a goddamn idiot is what I'm saying, and so are most of the people coaching in the NFL. Jesus, shut the hell up about the goddamn NFL, Charlie, I'm--

[A noise in the background]

I'm a very important engine, and the NFL really is a matter of perspective, since you've got these guys over here, and they know what you're doing, and you know what you're doing, unless you don't, and I know people and have phone numbers like John Bon Jovi's and Regis Philbin's. I can call them anytime and they answer except when they don't. That's just because they're busy and out there probably doing important things with important people like me but not me.

Charlie, we're going out recruiting. Get your ass off the beach, get a shirt on, and go get whatever the hell you need to run an offense or whatever it is you do besides hold down coolers.

---dammit, what the hell is that noise, Charlie?

Sorry, Will, but I gotta help these guys make it to the next level. There's only one way to learn, but actually there's a lot of different ways, but there's really only one way to do it and yeah guys you need to do it again go ahead. 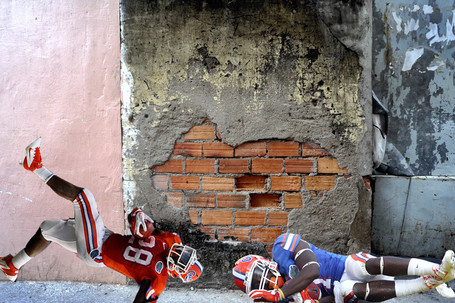 Demps: Coach I think I punctured my lung on that one.

Good, good. That's how you do it, guys. Right up the middle into that brick wall.