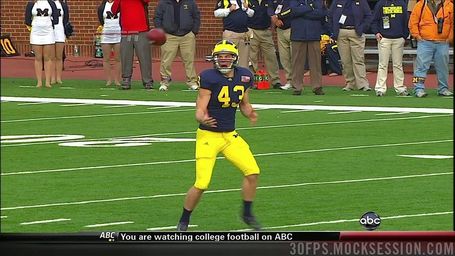 Onward to the Iron Bowl, but thanks to Will Hagerup for giving us the Most 2011 image yet. We once watched a video of a C-130 fighting fires over Yosemite where, in a catastrophic equipment failure, both wings fell off the plane. This is the exact expression that pilot made when that happened, but it's cool. Michigan celebrated its return to D-1 football after relegation with a win over Ohio State, and Derek Dooley made sure to undo every bit of corn liquor-tinged goodwill he may have had after beating Vanderbilt by snapping a 27 game win streak against Kentucky. That is the team coached by Joker Phillips that lives in Lexington and plays basketball and bourbon. We don't know how bourbon is played, but we know who wins the game: YOU DO, BABY.