BIG EAST MAN: A JOURNEY TO THE BCS HINTERLAND

Share All sharing options for: BIG EAST MAN: A JOURNEY TO THE BCS HINTERLAND

6:25 AM: I'm about to take the stairway down into my subway stop, an MTA employee calls out to me. "Where do you think you're going in such a hurry? No trains running here - rail's broken, so you've gotta take the shuttle bus over there and transfer." When I board, the bus driver motions to the box I'm carrying and asks if he can have a slice of cake. This is odd for two reasons. Firstly, the sun hasn't even risen, so it's no time for cake.

Snarled mass transit. Questionable literacy. This is how my trip to Piscataway begins.

One does not venture into foreign territory fully unprepared. To that end, I have brought three key items along with me.

8:45 AM: My hosts for the day are Rutgers die-hards Seth and Joe, and we're taking Joe's car to the stadium. I'm riding in the back with the beer, which sat there overnight to chill. NATURE. (Also the trunk has four tires in it. FOR CONQUERING NATURE.) We discover that the parking pass is missing just before we turn into the lot, jeopardizing our entry privileges. But Fate smiles upon us. Does the youthful parking attendant see the yearning in our eyes, the desperate hunger of fellow Scarlet Knights only seeking a meager patch of earth upon which to make merry? Or is he just not paid enough to give a shit? We may never know.

Other tailgates are setting up as we pull in - grills, tents, cornhole boards. (Stop it. STOP IT.) A group across from us has a platter of apple slices, grilled sweet potato wedges, and cranberry juice. Maybe they all ate an individual turducken before they came out here. That's it. That's what I'll tell myself.

Shortly, the other Rutgerians turn up - Ken, Nosh and his girlfriend, Amy, and another Joe and his girlfriend, Jackie. I don't know if 40% of male Rutgers alums are named Joe, and I recognize this is probably not an acceptable sample sie from a statistical integrity perspective, so let's say it's only 20%. Let's also say that all 20% are named after Emmy-nominated actress JoBeth Williams, so beloved is her performance in "Stop Or My Mom Will Shoot."

I am introduced as having something vaguely to do with InternetSportz, which proves to be absurd when it's revealed that I don't know if Urban Meyer's going to Ohio State, I really believe the reports that Robert Woods won't play against Oregon, and I think the ACC should consider reimagining itself as a book club. At some point I try to argue that when young George Washington chopped down the cherry tree, it was a warning sign of psychopathy. I think it relied on the premise that hey, everyone was killing small animals back in the day, but was everyone just deforesting for no reason? Kahlua, man.  Kahlua.

10:50 AM: A friendly, chubby woman offers me a jello shot while I'm in line for the bathroom. Perhaps this is not such a different experience. At the head of the line is Frank, who has a flag on his car bearing his cartoon likeness and proclaiming his to be the number one Rutgers tailgate. 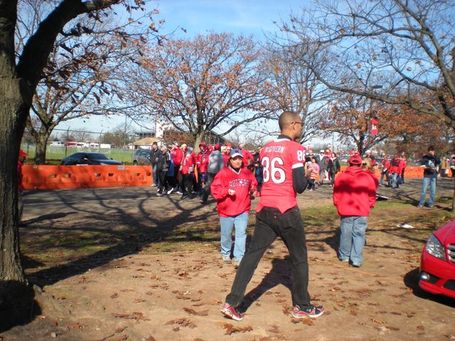 Conservatively speaking from my walk-by, Frank's tailgate would probably be the 127th best tailgate at Florida-Georgia and is probably not even in the top ten here. Frank refused my requests for comment. Ok, so maybe my request for comment was just giving him the evil eye from across the lot, but he ignored that all the same. WHAT ARE YOU HIDING, FRANK? THE FOURTH ESTATE WILL NOT BE SILENCED!

When I get back to my group, we buy tickets from a scalper who's walking the parking lot. He wants thirty a ticket, but Ken counters with fifteen. They settle on twenty, and the scalper lets us know he's only letting them go for that cheap because his dad dumped a bunch on him to get rid of just that morning. That's unsettling because he appears to be sixty. Maybe Rutgers football tickets are administered in the style of the Holy Grail, by a group of brothers (including the scalper's dad) from the Crusades who swore to protect these treasures for reasons which are sort of unclear.

We finish our last beers and start to pack up the car. Because it's a fun thing to do in an inappropriate setting, I let lose with a "ROOOOOLL TAAAAAHD!" Unblinking, Original Joe looks at me and deadpans "War Eagle."  Original Joe has SEC potential. (We'll start him as a Vanderbilt fan, the Daisies of our conference.)

11:20 AM: On our way into the stadium, Nosh makes a point of noting that Rutgers has a much better record than Florida and I agree that, yes, this year the Gators are pretty terrible. The walk sort of feels like being surrounded by Georgia fans who have abandoned their sartorial devotion, which is unsettling. So I'm experiencing all of the mockery of a post-Florida-loss Jacksonville with none of the sundresses.

Are you happy, Doug Gillett?  Are you? 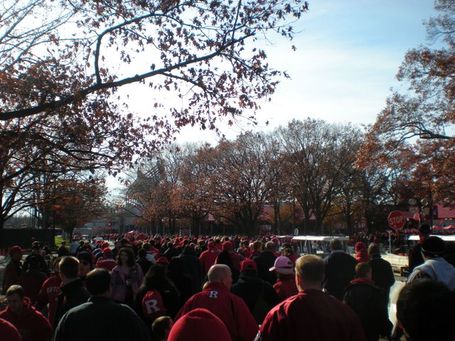 12:15 PM: Did you know that Rutgers beat Princeton by a score of 6 to 4 in the first college football game ever, played in 1869? And, on the basis of this one win - Princeton took the rematch the next week, and that was the entirety of the season - Rutgers claims a share of the championship for that year? No?

Excitement has petered out a bit since then. 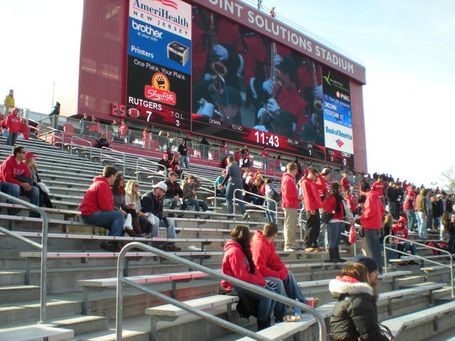 (Tulane thinks this crowd is out of control.)

In fairness, this game took place on the annual Russian Day of Missile Forces and Artillery, so the students probably didn't show up until midway through the first half because they were busily reenacting the Battle of Stalingrad elsewhere on campus. From what I'm told, not even the 5th Tank Army conducted Operation Uranus as magnificently as Pi Kapp.

This is also the time when Nosh begins berating Ken about tomorrow night's Eagles-Giants game, a classic rivalry of which we could say many things but can all agree is not the game that we are all actually attending. Maybe this is a thing people do of which I was never aware? Are Michigan fans spending TV timeouts talking shit about Packers-Lions? Was the Stanford band on the field because a fight broke out regarding the relative merits of the Raiders and the Niners?

Even more bafflingly, Ken is extremely good-natured throughout Nosh's tirade, which lasts the entirety of the game. I question your Philly bona fides, Ken. Throw a battery or go root for the Bengals.

1:05 PM: Here is what I believe Cincinnati's offense came into this game trying to do:

- Rush for at least a yard a carry.

- Don't ask Munchie Legaux to throw the ball to anyone running a route deeper than eight yards.

- Make sure everyone has a permission slip.

1:50 PM: Oh, what's that? Florida is down by 15 to Furman? Thank you, universe, for validating my decision to attend a Big East game!  In your honor, John Brantley will throw complete passes at a rate less than the percentage of West Virginians with broadband internet access.

Rutgers has taken a page from Tennessee and Oklahoma by adopting that old favorite, the endlessly repetitive song. For the Scarlet Knights, that song is a guitar riff that plays over the PA when the opposing offense is faced with a third down. In response, the students silently pantomime what I guess is supposed to be an elongated strum. But I suspect it's a pageant wave, and only an okay one. Not grand supreme worthy or anything.

And this is another thing I've never seen at a college football game before. 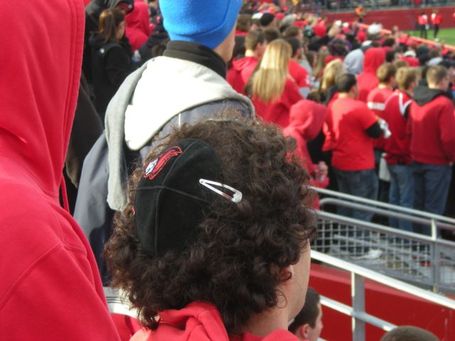 I mean, is that a weird shade of blue or what?

3:50 PM: Rutgers wins the game pretty handily, 20-3, and they're still in the hunt for the Big East title, but they need help. Unfortunately, that help will have to come from the South Florida Bulls. Have you ever thought to yourself, "Man, I hope that guy from Tampa really comes through for me!" If you did, what was it like when you ended up in jail/moving a refrigerator by yourself/pregnant because of your naivete?

Seth and Joe have one more thing they insist I need to do in order to have the full Rutgers experience: get a Fat Sandwich from the Grease Trucks on campus. A Fat Sandwich is a nine year old's dream, which is to say that it's a way of eating several fried foods all at once without judgment. Or, at least, without a LOT of judgment. I select the Fat Darrell, which is a hoagie stuffed with chicken fingers, mozzarella sticks, french fries, and marinara sauce. My aorta is displeased, but what's it ever done for me anyways? You know what won't whine and grumble so much, Aorta? The new robot heart I'm buying from Taipei. 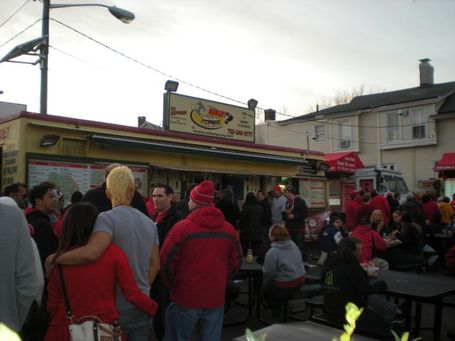 There is an ongoing challenge here: anyone who can eat five Fat Sandwiches in 45 minutes gets to invent one of their own, which will forever be named after them. Had I the courage and the skill, this is what the Fat Run Home Jack would contain:

And I'd take my children to the trucks, and show them the sign. "See that?  That's me - that's your old man. Yeah, I really used to be something, way back when. Please don't tell your stepdad I picked you up from school in a stolen mail truck."

6:45 PM: I'm back in Manhattan, in the West Village. This is the best place in the world for perfectly healthy and fine-looking people to walk around and feel incredibly fat and ugly. There is a poetry to ending my day like this, a role reversal of sorts: now, I am the unwashed, the lowly, the Big East begging for scraps from the impeccably maintained SEC. I finally understand you, Rutgers. Now I see you for the beautiful, if roughly-hewn, jewel you really are.

(But not if you lose to UConn. They got beat by a directional Michigan, dude.)