THIS SEEMS UNSPORTING. Sure, you'd step into that fight you have no context for, brah. YOU'D WRECK SHIT, just like you did in that other fight you never fought ever.

This is a reminder that fighting is a bad idea as an adult unless you have eyes in the back of your head and can smell knives and firearms.

ALL HAIL THE ALPHABETICAL. You have to apologize for all the really fun things in life except the Alphabetical. Even at 3,000 words it doesn't come close to encompassing the madness of this past weekend, but that would take a novella at the very least, and if you ever came right out and said "I'm writing something, but don't call it a novel, it's more like a novella," you deserve to be punched in the taint as hard as humanly possible.

WELL HELLO STRANGER. Greg Byrne broke university communications into some new frontier by tweeting a picture of new Arizona coach Rich Rodriguez wearing an Arizona hat in Byrne's living room. This is not that picture. 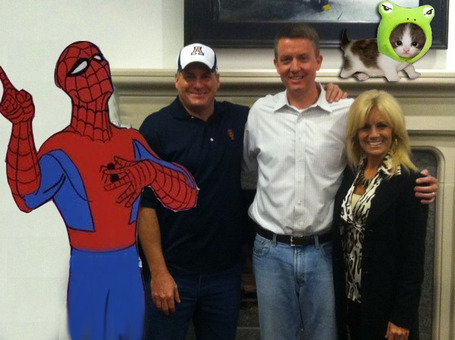 (Via.) AZ Desert Swarm is pretty happy with the hire, and there's little reason for them to doubt the sentiment. Rich Rodriguez will be fine as long as he a.) doesn't let Greg Robinson anywhere near his defense, and b.) if no Arizona paper hires the despicable Michael Rosenberg as Arizona's beat writer, because he'll get him! (I don't like him! looks shifty! Journalism!) Bruce Feldman was the first to break the story, and that's something Joe Schad should credit every now and then llest the LOLception strike again.

Feldman also has his ten assistants to watch

TCU KICKING DOWN THE BCS DOOR AND OOPS A FEW OTHERS. Like a pitcher only throwing punches with his non-throwing hand, we hope TCU's kicker booted down that door with his non-kicking leg. It's what a professional would do.

PRESIDENT PATERNO THREATENED FIRINGS. And now that the gate's open, let's just let all the hellbeasts loose from the Penn State demon-pen, including Joe Pa forcing ultimatums on the firing of non-football personnel for doing their job.

CUE THE BENNYHILLIFIER. BYU's move to the Big East is...it's not going well at all, actually.

BAYLOR CRUTCHES GIRL REGRETS NOTHING. She is real, and in her own way spectacular.