SO THIS IS A THING

Share All sharing options for: SO THIS IS A THING

Sometimes in the hustle and bustle of covering semi-important football-ish topics like the top two teams in the country going head to head or two of the top six doing so shortly after, it's easy to miss what clearly should've been the top story in college athletics. While an overtime win over Alabama is nice and all, what truly has the potential to set a team up for great success (as well as great failure) is when a group of semi-notorious alumni come together to create something so puzzling, so surreal that you can't help but step back and wonder if fate's cruel joke isn't that this exists in the first place but rather why it didn't exist sooner.

On October 11th, seminal scrunge (as in scrunging for their next hit) rockers (and fringe queefcore diplomats) Better Than Ezra released an LSU-centric 8 track EP which is not only licensed by the NCAA but can be purchased at Tiger Stadium. The results are more harrowing than you ever imagined. 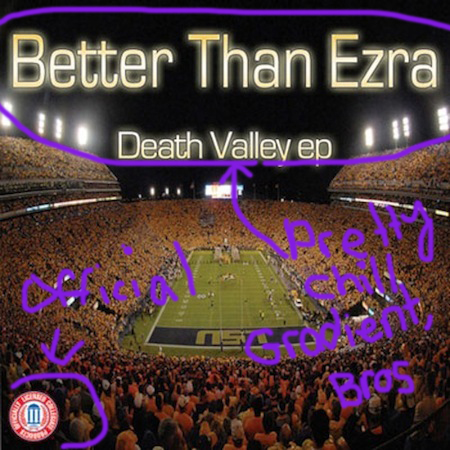 We begin with the cover art. What was rendered with an unlicensed, cracked copy of Paint Shop Pro on a computer still strongly rocking Windows ME certainly gets credit where credit's due: that background image is, in fact, Tiger Stadium.

Just, wow. As always, YouTube commenters put it better than we possibly ever could:

The album's euphonic motif stays consistent throughout, as the band also includes covers of The Swingin' Medallions' classic "Double Shot (Of My Baby's Love)", a version of "Tiger By the Tail" that sounds like Ryan Gosling's substandard safety in "Remember the Titans" would bump, and a nauseatingly poppy rendition of fellow stadium standard "Hey Baby". To self-promote and further remind that part in the back of your head that refuses to forget that "How Does Your Garden Grow?" was essentially the queefcore-era's answer to "OK, Computer", the band includes a fan familiar reinterpretation of their classic "This Time Of Year", which is said to have been inspired by a road trip to an Ole Miss-LSU game sometime in the 90's. They also include a selection, "Hell No!", from 2009's "Paper Empire", which this ironically-suboptimal-music scholar refuses to recognize as proper BTE canon. None the less, it's important for you to recognize that the creative decisions here include but are not limited to autotune *and* a bullhorn-like vocal processing effect:

And then there's the EP's closer "Chinese Bandits". It's a non-sensical Tim & Eric inspired chant piece that does include "TO HELL WITH OLE MISS" and miscellaneous indecipherable Alabama trolling. Because I hate you as much as I may hate myself, for your listening pleasure:

Again, we default to the YouTube commentariat's infinite wisdom to land this jumbo jet of mind blownage:

She seems like a credible expert on this sort of musical phenomenon.

I know that was a lot to process, and how exactly it impacts LSU's national title implications still remains to be seen, but let's depart by reflecting on the following:

[Better Than Ezra frontman and songwriter Kevin] Griffin: I've hung out with [Les] before in Baton Rouge

This was a real thing that happened once.