(Interior: A library on a fall afternoon.  The clock reads 10:22.  INDIANA HEAD COACH KEVIN WILSON, seated, tears pages out of a book and throws them around at random.)

(Wilson tosses the pages at Withers.)

OKLAHOMA HEAD COACH BOB STOOPS: I don't know, my president said I was but my athletic director told me to just blow him off.

RHOADS: Big party at Fickell's, parents are in Europe.  Should be pretty wild...can you go?

STOOPS: I doubt it.

STOOPS: Well, 'cause if I do what my president tells me not to do, it's because my athletic director says it's okay.  There's like this whole big monster deal, it's endless and it's a total drag.  It's like any minute...divorce. 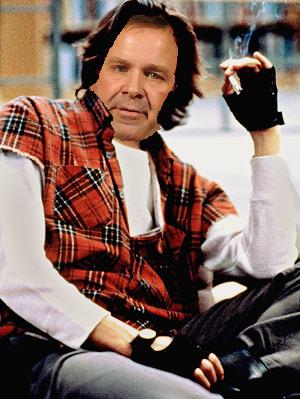 WILSON: You like your athletic director better than your president?

STOOPS: They're both strict.

WILSON: No, I mean, if you had to choose between them.

STOOPS: I dunno, I'd probably go live with my brother.  I mean, I don't think either one of them gives a shit about me...it's like they use me just to get back at each other.

(Suddenly, from the back of the room, BALL STATE HEAD COACH PETE LEMBO speaks for the first time.) 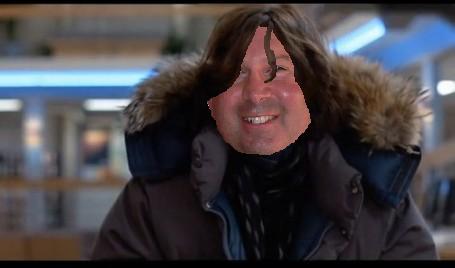 (He blows his hair out of his eyes and grins.)

RHOADS: You're just feeling sorry for yourself.

STOOPS: Yeah, well if I didn't, nobody else would.

WILSON: You get along with your administration? 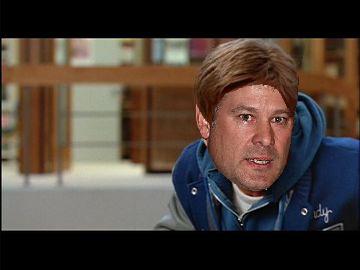 WILSON: You're an idiot anyway.  But if you say you get along with your administration, well, you're a liar too.

(The two start to shove one another.)

WITHERS: Hey, fellas, I mean...I don't like my president or AD either.  I don't get along with them...their idea of program compassion is just, you know, wacko!

WILSON: You are an athletic director's wet dream, okay!

RHOADS: Why do you have to insult everybody?

WILSON: I'm being honest, asshole!  I would expect you...to know the difference!

STOOPS: I'm not a failed coach! 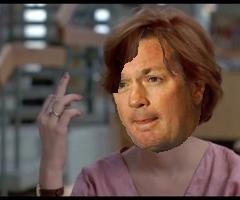 STOOPS: You know what I wish I was doing?

WILSON: Oh, watch what you say, Everett here is a cherry.

STOOPS: I wish I was on a plane to France.

WITHERS: I'm not a cherry.

WILSON: When have you ever been to a bowl?

WITHERS: It's this bowl up in Canada, played near Niagara Falls.  You wouldn't know it. 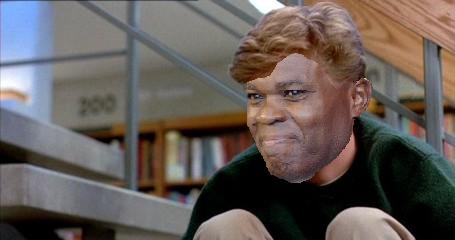 WILSON: You ever beat anyone around here?

(Withers points to Stoops, whose back is turned to them.)

STOOPS: What are you talking about?

WITHERS: Nothing, nothing!  Let's just drop it!

STOOPS: No!  Drop what, what're you talking about?

WILSON: Well, Everett's trying to tell me that in addition to a number of bowls in the Niagara Falls area, that, presently, you and he are, scheduling home and homes!

WILSON: Were you or were not motioning to Bob?

WITHERS: Yeah, but it was only...Was only because I didn't want him to know that I was a postseason virgin, okay!

STOOPS: Why didn't you want me to know you were a virgin?

WITHERS: Because it's personal business, it's my personal, private business.

STOOPS: I think it's okay for a coach to be a virgin.

AN HOUR AND FORTY MINUTES LATER

RHOADS: All right, what about your team?

RHOADS: That's bullshit.  It's all part of your image, I don't believe a word of it.

WILSON: You don't believe me?

(Wilson rolls up his right sleeve.) 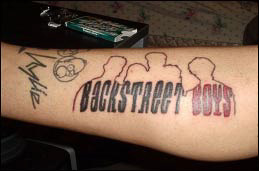 WILSON: Do you believe this?  Huh?  You see, this is what you get at my school when you lose your homecoming game to Northwestern by 21!

LEMBO: You wanna see what's in my playbook?

RHOADS: Holy shit!  What is all that stuff?

WITHERS: Do you always carry that many offensive yards around?

LEMBO: Yeah...You never know when you may have to jam.  My conference life is un...satisfying.

RHOADS: Well, everyone's conference life is unsatisfying.  If it wasn't, teams would stay in the Big East forever.

(He starts packing formation sheets back into the playbook.)

RHOADS: Okay, fine, but I didn't dump my offensive scheme out on the couch and invite people into my problems, did I?  So what's wrong?  What is it?  Is it bad?  Real bad?  Recruiting?

RHOADS: What do they do to you? 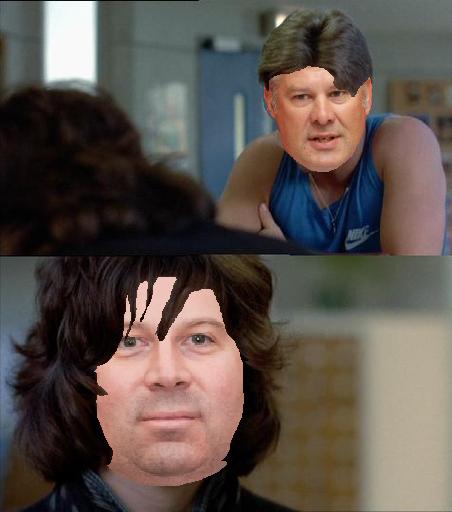 LEMBO: They ignore me...

(They both cry silently.)

WITHERS: Um, I was just thinking, I mean, I know it's kind of a weird time, but I was just wondering, um - what's gonna happen to us on Monday?  When we're all on the schedule again?  I mean, I consider you guys my friends.  I'm not wrong, am I?

WITHERS: So, so, on Monday - what happens?

STOOPS: Are we still friends, you mean?  If we're friends now, that is?

STOOPS: Do you want the truth?

WITHERS: Yeah, I want the truth.

STOOPS: I don't think so. 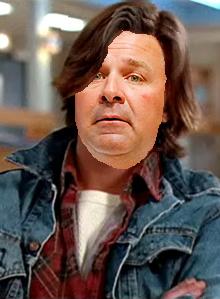 WILSON: You're a bitch, Bob!

STOOPS: Why? Cause I'm telling the truth, that makes me a bitch?  What would your Legends and Leaders say if we were walking down the hall together?  They'd laugh their slow asses off and you'd probably tell them you were doing it with me so they'd forgive you for being seen with me.

WILSON: Don't you ever talk about my friends!  You don't know anything about Michigan, you don't look at Ohio State, and you certainly wouldn't condescend to speak to PURDUE, so you just stick to the things you know - shopping, nail polish, your father's BMW and your poor - rich - drunk T. Boone Pickens in the Caribbean!  Just bury your head in the sand and wait for your fuckin' Fiesta Bowl invitation! 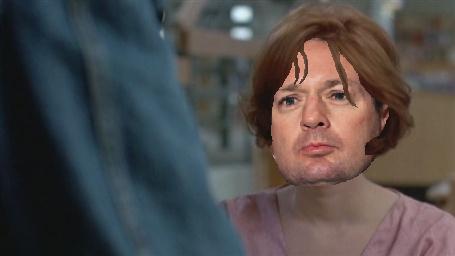 RHOADS: What's the gun for, Everett?

WITHERS: I can't recruit after this NCAA shitstorm, I can't do it and I know my athletic director can't do it!  Even if I win out the rest of the year, I'm still gonna lose a ton of scholarships.  And everything's ruined for me!  So I considered my options, you know?

STOOPS: No!  Killing yourself is not an option!

LEMBO: It was a hand gun?

WITHERS: No, it was a glue gun.  It set my desk calendar on fire.

(The other coaches start laughing.)

2 HOURS, OR MAYBE JUST LIKE AN HOUR FORTY FIVE, LATER

(The coaches have left an essay behind, which reads as follows:)

We accept the fact that we had to spend a whole Saturday with a bye week for whatever it was we did wrong.  But we think you're crazy to want an essay telling you who we think we are.  You see us in the simplest terms, in the most convenient definitions.

But what we found out is that each one of us is a brain...

Does that answer your question? 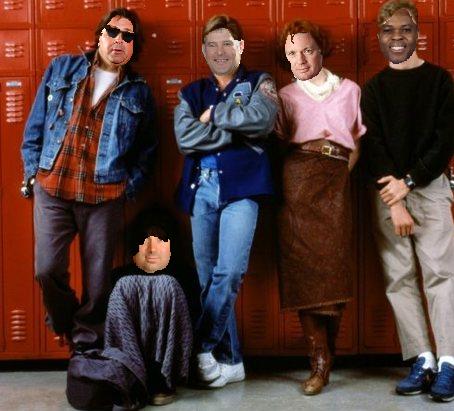 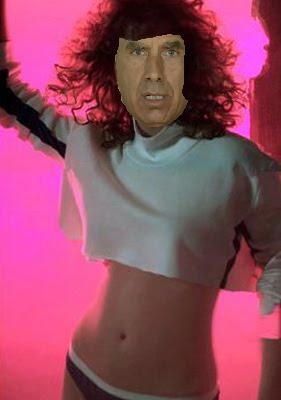 SO WHAT WOULD YOU LITTLE MANIACS LIKE TO DO FIRST?