WHERE DID GARY PINKEL GET HIS DWI?

Share All sharing options for: WHERE DID GARY PINKEL GET HIS DWI?

Before we begin, let us say this: DWI, DUI, or any variation of hammered driving is bad. Also, killing is wrong, and don't take other people's things, and human flesh is not food. Exception: unless someone from Louisiana is cooking it, but make sure they were a good person before eating them. Evil lives in the flesh, which is why you should never just blindly accept organ transplants from anyone who offers you a kidney. THEY MAY BE TRYING TO MAKE YOU EVIL WITH A KIDNEY FROM A KILLER.

That said, Gary Pinkel getting a DUI brings up questions. Will he keep his job? (Probably: it's his first offense, and a minro one if he got off with a $500 bond.)  Will he be allowed to coach this weekend? (Probably not, since he suspended two MIzzou players for two games for the same offense.) Will this affect those looking at Pinkel for other jobs? (A bit, perhaps, but again, this is relatively minor.) 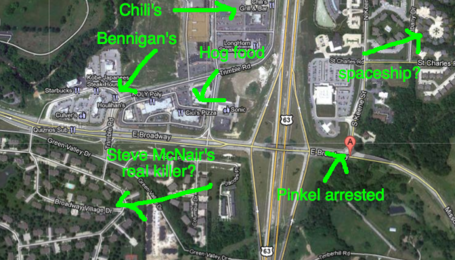 Graphic by Sports By Brooks

More importantly, since we know exactly where he was pulled over, where did Pinkel have one too many before his arrest? Thanks to Google Maps, we have expert guesses.

CHILI'S: 3/1. If we were a cop...boy, would your neighborhood be in trouble. But if we were, and needed to rack up a couple of quick arrests for our monthly quotas, we would park outside a Chili's and wait for some poor overserved middle manager to pile into their car hammered on Presidente Margaritas and nursing a 3,500 calorie meal. "How did this happen, sir?" "Nachos. Endless nachos, sir." Those death circles they draw around cities in nuclear war simulations? Every Chili's has these, but for DUIs.

HOULIHAN'S: 3/1.  Your alternate universe Bennigan's, carrying on the tradition of eating lukewarm potato skins in a warehouse with bric-a-brac nailed to the walls and satellite radio blasting John Parr's "Man in Motion." Another district manager DUI honeypot.

LONGHORN STEAKHOUSE: 5/1. Slightly less likely due to smaller bar and danger of falling asleep in car after steak coma. Ditto for nearby Japanese steakhouse, but Pinkel doesn't drink sake unless he can ice it himself HAHAHA! Kicking jokes. 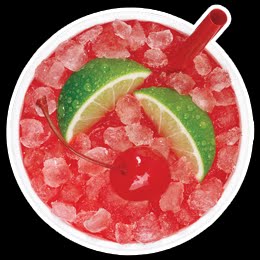 AIRPLANE BOTTLES PUT INTO A SONIC CHERRY LIMEADE AND TAKEN AS A ROADIE: 9/1. Would indicate a really serious drinking problem, but still, we'd be impressed by the ingenuity and good taste displayed here. NOTE: respect doubled if he was eating a batch of cheesecake bites at the same time and not even feeling one bit sorry about it. Tripled if Pinkel said to himself in the car "Girl's Night Out!", and then hummed and danced to himself the whole time even though no one else was in the car. (And then cried.)

CICI'S PIZZA: 15/1. No one should ever go to CiCi's Pizza, but if you have to do it, do it stinking drunk. It's easier to eat heated drywall covered in candlewax when you're BOD.

RUMORS CABARET: 18/1. Okay, just two miles away is Rumors Cabaret, which despite being an adult establishment has a SFW and well-written guide on proper strip club behavior. (She really IS working her way to an English degree!) It might have been that kind of night, and who could blame Pinkel. 18 hour days, the stress of planning for an SEC move, and those overdue videotapes all add up to quite the burden after a while.

ARCH AND COLUMN: 25/1. A gay bar, but Pinkel's there for the karaoke. They're the only ones who appreciate his rough but impassioned version of "Seasons of Love," and for that he'll always owe them.