The following is an excerpt from the transcript of the Florida/ South Carolina game as called by Tim Brando and Spencer Tillman on CBS this past Saturday. As you can hear, they, too, want the Napa Know-How Man dead by dusk. 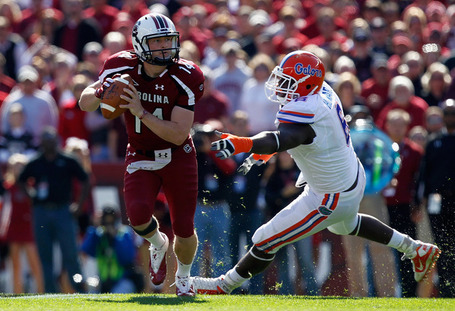 Brando: ...and there's Conor Shaw again on a keeper off the right side for a first down.

Tillman: Excellent awareness by Florida's Jaye Howard there to misread the option AND fall into his defensive tackle at the same time.

Brando: Will Muschamp says it's one of the big success stories on this team this year.

Tillman: That's actually true. That's what an irredeemable shitheap of a year this Florida team is having, Tim.

Brando: Charlie Weis would agree. He didn't sound happy in meetings this week at all with the performance of his offense.

Tillman: He's a perfectionist. To be fair, they have had some depth issues, and injuries, but credit Weis. He's done a great job coaching with a ski-mask on both here at Florida and at Notre Dame.

Brando: Paychecks don't pick themselves up, Spencer.  And another zone read. Where does Steve Spurrier bleed when running this high school offense to run out the clock in a 14 point effort that ends in a win? Is it from the eyes? The ass? Or is it kind of like the bleeds, just pouring out of everywhere at once?

Tillman: He's a professional, Tim. I'm going with a light mist from the pores at all times.

Tillman: Consider the sperm whale, Tim. Locked in mortal combat with the giant squid for all eternity. You know this battle has never been captured on video before, right?

Brando: Unaware. I should have called that play that just happened, but for our viewer's sake I'll just let them assume the obvious: that Shaw dropped the snap, Florida failed to recover, and he then hit a receiver off a deflection for a six yard gain. I'm weeping openly, viewer, for the state of SEC football.

Tillman: The only evidence we have is of massive piles of compacted whale feces, almost all of it composed of processed squid.

Brando: Why, those have to look like Columbian cocaine subs, Spencer.

Tillman: More like the Red October breaching the surface. Sailors would salute it out of habit.

Tillman: Nothing. I just thought talking about a 35 foot long piece of whale shit was better than discussing this game.

Tillman: Or as they call it in the SEC East, "Toe Poon."

Brando: To our viewers who just heard Spencer use that language, we apologize if you are offended, but I'm sure that was the name of a Burmese minister of something or other at one point in the past fifty years ago.

Brando: A country filled with poverty, oppression, a raging drug trade, deforestation, and human rights abuses. Buffeted by the cruel sea on one side and banked in by mountains on the other, it is a series of steaming swamplands and cruel lowlands inhabited by a polite but isolated people who look to the savage past for inspiration, and fear a future of change. Football is not played there, and never has been. Malaria is endemic, as is cruelty.

Brando: I am seconds away from swallowing my own tongue to avoid finishing the rest of this game.

Brando: Speaking of that shit: the Florida offense has the ball.

Tillman shoots pure heroin into his neck just to dull an eighth of the pain of what he is about to watch. 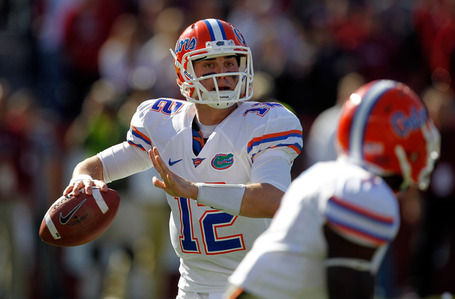 Tillman: The pistol formation is a new wrinkle in the Florida offense.

Brando: Lotta wrinkles this year for them, Spencer. Basically one cancer-ridden Shar-Pei of an attack at this point.

Tillman: A toothless one at that, Tim. A toothless, bed-ridden, and incontinent Shar-Pei that cost you almost a million dollars.

Brando: Some people say the pistol formation is the future of offensive football, Spencer.

Brando: You ever wonder what happens when you throw a 170 pound man into a meat grinder, Spencer?

Brando: Well, I don't either, but I'd only need to do it once to find out. Charlie Weis seems to need multiple tests to figure out the answer, because that's all he's been doing with Chris Rainey all season long.

Tillman: No one said science was simple, Tim.

Brando: Have we considered that Xavier Nixon is living a few seconds in the future? And may be a time-traveler?

Tillman: That would explain why he false starts on every play, Tim. Have you seen the Time Traveler's Wife, Tim?

Tillman: In the book he makes love to himself at one point just to see what it feels like. That's the best description I can give of what it's like to watch this offense at this point.

Brando: Incorrect. That implies someone derives pleasure from the act. Let's go to Lewis Johnson on the sideline. Lewis?

Johnson: An update on the Florida offensive line, guys: Dan Wenger is now just chasing feral cats under the stands of Williams-Brice Stadium.

Tillman: Tell him to give my best to albino cave lake dweller Blake Mitchell while he's under there.

Johnson: Will do. Back to you, guys.

Brando: And another punt. Jesus, why didn't I work for BTN.

Brando: Would that this conference find a mind like Kirk Ferentz's to bring these offenses into the 20th century.

Tillman: When I was a boy I watched a turtle run over by a car.

Tillman: It's didn't explode so much as pop, with the viscera of the turtle appearing like hot magma between the cracks of the fractured carapace, Tim. it was the first time I saw real horror. My innocence ended. The world was rent by the fact of my flesh, and that I was little more than prey on the wing, a piece of consumer material waiting for the right price tag, a slab hanging on the hook.

Tillman: Box turtles are oviparous, Tim. They lay eggs. I'd say this Florida offense was the same, but only if I get the caveat that inside those Weis-eggs are bits of steel wool, pepper spray, and shredded losing lotto tickets.

Brando: You got it buddy. As the Gamecocks take a knee for a win, this is Tim Brando, going off to blind six horses with a railroad spike.