THE AUBURN TIGERS AND WHAT'S RIGHT WITH COLLEGE FOOTBALL

Share All sharing options for: THE AUBURN TIGERS AND WHAT'S RIGHT WITH COLLEGE FOOTBALL 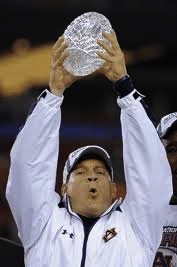 This has been a difficult week to be a college football fan, or at the very least, a difficult week to talk about college football with a smile on one's face. Every day it seems we get a new peek inside the worst that college athletics, or even the worst that humanity, has to offer. If you've been tempted to just box up your interest in football and leave it in your closet until the NFL playoffs start in a couple months, I wouldn't blame you.

But when I get off work this afternoon, I'm getting in the car and heading three hours northeast of here for the cure to that kind of misery and malaise. The Auburn-Georgia rivalry is a reminder of what's right about the sport: a friendly competition that takes place between neighbors, with a minimum of malice, hatred or poor sportsmanship. It's the game I circle in red ink every season -- even if I can't make it to any other game, I make it to that one.

With most rivalry games on the schedule, I'd spend a post like this making fun of Florida or Georgia Tech and hurling as many insults as I could come up with, but Auburn's different. Growing up just down the road in Columbus, Ga., I've got a special place in my heart for them, so with Orson's permission I'm devoting this post to a list of reasons why Auburn is a program we can look up to -- a source for inspiration when the rest of the college football landscape has darkened. 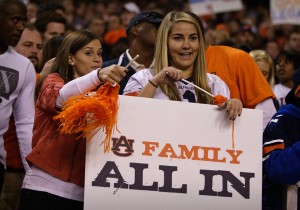 We'll start with the Auburn Family. I'm not sure whether that's capitalized or not, because said Family is a difficult thing to describe. But I think it means thousands of students, alumni and fans gathering together over the course of a season to support the coaches and players in their quest for victory. "Big deal," you might say, "that could describe pretty much any major college football program in the country, Georgia included." And there's probably some truth to that, but . . . well, it's just hard to put into words what makes Auburn different. Other programs may act like families, but Auburn goes to the trouble of calling itself one, and perhaps that's the critical distinction here.

When you grow up in a loving, nurturing family like the kind the Auburn Family epitomizes, you learn things. Things like hard work, honesty and integrity. How do I know the members of the Auburn Family have learned that? Because in the entire history of Auburn University, their football program has only incurred seven "major violations" from the NCAA, and they haven't been on probation since April 2006. It's tough to maintain success at any level of college football without bending the rules a bit, particularly in a conference where (and let's be honest with ourselves, SEC fans) the "If you ain't cheatin', you ain't tryin' " philosophy seems to rule the day. But somehow, Auburn has made it work.

I'll admit, during that prolonged investigation into the recruiting of Cam Newton, things looked shaky. Fans across the country were waiting for the other shoe to drop, and what a disaster it would've been if it had, to see an institution of Auburn's virtue laid low. What we're seeing up in State College right now is an example of the pain that can be caused when an icon previously thought to be unimpeachable makes the wrong choice. But Auburn stood firm: Confronted with a merecenary father who held out his own son as a prize for any program that would ante up his stated price, Auburn said no. "No," they told Cecil Newton, "no, sir, we will not pay one penny for your son to come to Auburn, as talented as he may be, because that's against the rules -- and on top of that, it's not the Auburn Way." In these cynical times, it's easy to roll one's eyes and dismiss a stand like that as mere talk, but so moved was Cecil Newton by Auburn's steadfast integrity that he sent his son off to Auburn without a single dime changing hands. The question isn't "How could anyone want to send his son to Auburn that badly?", but rather, "What father wouldn't?"

I've gone on at length about Auburn's values in an abstract sense. But there's an actual game going on this weekend, so let's talk about something tangible: the players. In an era where head coaches are expected to be not just play-callers but "CEO-style" managers, spreading themselves perilously thin as they oversee every aspect of the team, it ought to be easy for Gene Chizik to lose track of the guys on his roster. Yet since he landed at Auburn-Opelika airport in the winter of 2009 to that famously controversial welcome, he's proven his doubters wrong with a very conspicuous number: zero. That's the number of Auburn players who have been arrested on his watch. I didn't have time to do a lot of research into that, mind you, but it wouldn't have mattered -- you look at Gene Chizik and you know right away that's a man who's on top of things.

How do I know Chizik keeps a tight leash on his players off the field? Because I see how disciplined they are on the field. Pugh, Fairley, Ziemba: These are guys who play to the whistle and not a moment after, who can give their all without letting their base emotions take over. And in that rare instance where they slip up and transgress the boundaries of what's acceptable in a football contest, even if only inadvertently, they'll damn sure hear about it from their coaches. Take a look:

I apologize for the prissy, know-nothing TV commentators in that video and all their needless fainting-couch hysterics over "dirty play," because the focus of the clip shouldn't be what was done, it should be how those actions were punished. Nick Fairley laid some late hits on Aaron Murray in last year's Georgia-Auburn game, and that was unfortunate, but look at the reaction from assistant coach Trooper Taylor: He clearly isn't having any of it. At about 1:05 in that clip, as Fairley is trotting away from the scrum at midfield, you can see Taylor chase after him, stop him, and slap the palm of his hand as if to say, "NO. No, young man, that's not right. You helped instigate what's going on back there, and that's not how a member of the Auburn Family does things." Some might call that a minor punishment, close to a literal "slap on the wrist," but trust me: As someone who's covered college football extensively for many years now, it's a humiliating thing for an assistant coach to call you out like that on the field in front of nearly 90,000 fans. I didn't see what happened to Auburn's Michael Goggans, the player who was ejected as a result of that brawl, but it's safe to assume he came in for some choice words from Coach Taylor as well once he made it back to the sideline.

And this is where I owe you an apology, Auburn Family, because I was wrong about Trooper Taylor for a long time. At first I interpreted his boisterousness and towel-waving as stirring the pot and shoving it in the face of rival fans, but I've since decided the guy just loves the game -- loves life, really. Believe me, I've heard the stories about him showing up every Sunday at churches across Alabama and taking up collections for his charity -- why we don't hear more about that in the media, I don't know. Maybe it's just easier to pigeonhole guys like that as "jocks" who are oblivious to the world around them. Then again, maybe he's in it for the good works and not the glory, in which case more power to him. How much better off would our own programs -- hell, our own country -- be if we had more people with his selfless attitude?

I've rambled on here for so long that I've probably ticked off my fellow Georgia alums praising an arch-rival program like this. Don't get me wrong, I hope we beat Auburn this weekend, and with any luck I'll be right there in the stadium screaming my head off as it happens. But while I might cheer against Auburn for this one game, I'll be cheering for them the other 364 days of the year -- cheering for their ongoing efforts to lift college football out of the depths, to show the disillusioned and the cynical that it can all be done with honor. While we're sitting around bemoaning scandals and realignment and the growing influence of the almighty dollar, let's not forget there's at least one program out there daring to do things the right way.

War Eagle, fly down the field indeed. There'll be angels flying with you.