HAPPY VETERANS DAY. To those in service, here's hoping you get the chance to watch some football this weekend. Please take your hat off, though. You can do that, and thus not obstruct the view of the person behind you. No one anywhere in the world figured this out until 1965, and countless spectator events were ruined in the process. 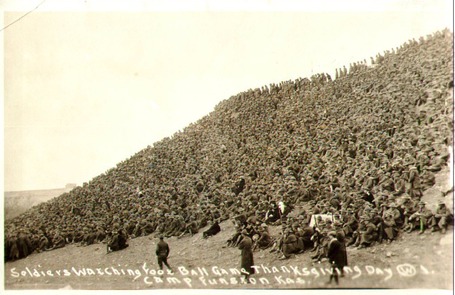 This is via a Camp Funston historical site, so in theory this might have been an OK State/K-State game, though we'll have to ask Bill Snyder for sure. (Because he was there, you see.)

AND THAT'S WHAT HAPPENS WHEN A QUARTERBACK CAN RUN. From the Rumble Seat has the secret to Virginia Tech's hot offensive hand last night: the lumbering but unstoppable Sasquatch of the Appalachians, Logan Thomas.

We had no answer for Logan Thomas. It took 3-4 defenders to tackle him on every play. It didn't seem like the Hokies really planned for Thomas to run like he did, they just kinda realized early in the game that he could truck all of our defenders one on one.

Meanwhile, Ohio and Central Michigan only scored a combined 71 points in Mt. Pleasant, Michigan, the most ironically named city in America because every time we've ever seen it on screen it looks like it's blowing gales at 20 degrees Fahrenheit. Houston says that's cool, if you need to borrow points we have some LOL. The Cougars scored 35 in a quarter against Tulane. Blink. Blink. (Cotton Turner even got to throw one, after which he better have done some kind of clogging celebration because his name is COTTON TURNER.)

GET ME DIAZ AND THE HEAD OF INIGO JONES.  Manny Diaz is one of the leading candidates to replace Houston Nutt at Ole Miss, and with reason: he's young, hypersmart, familiar with the Mississippi recruiting scene, and can have people killed in Miami over recruiting disputes. (His dad is a former mayor of Miami, a kind of half-mascot, half-bloodthirsty overlord role in the city.) It would be a fine hire, even if it would replace our "Jackie Sherrill comes out of retirement and REALLY shows everyone how to raise a middle finger to the NCAA. Oh, and if they played Vandy. James Franklin, I was out bangin' mommas to get their sons to sign on the bottom line when you were swimmin' in your momma's milkman's joy-satchel. Bring it, but be prepared to pull back a stump, cause I'm half-snappin' turtle, half-feral dog, and all man.

THE MOST DANGEROUS TEAM IN AMERICA. Besides Florida, of course?* Oklahoma State, whose game against Texas Tech is in Lubbock, which literally means anything can happen because Lubbock sits closer to the rent in the fabric between our world and the next than any other city in America.

HEY LOOK A HAIRY MAN ON TELEVISION. It was on short enough notice that we couldn't iron a shirt, but other than that it went well-ish. CLAY HAS A TINY HEAD.