SPORTS! Actual, real, delightful, complication free sports. Sure it's the Athletic Atlantic Coast Conference, but this is the game of emperors we're privy to this evening. Paul Johnson is a righteous dynamo, and if you expect otherwise, prepare to have your world view corrected promptly. Sure we don't always get Factor'd, but when Thursday night delivers the goods, it's best to prime your reality so the aforementioned Coach Paul Johnson's icy stares don't push you into a nether dimension where people have feet for arms and arms for feet. And if you happen to be caught in the vortex between where Frank Beamer's scars end and the next dimensional plane begins, well, godspeed, sir or madam.

The five categories are: Nebulous Statistical Comparisons of Dubious Validity, Mascot, Aura, Names, and Grudges/Scores to Settle/Sheer Cussedness. Up and at them!

Nebulous Statistical Comparisons of Dubious Validity. Woah, there CPJ! Your team is actually kind of, sort of, finally passing the ball, and you know what Woody Hayes said about team's that pass the ball? That's right, nancy pants. Even though you found (Fuck) Clemson's panties in your collective purse following doing exactly not that and returning to the (artificial) grassroots that made you a don in the first place. Somethingback Tevin Washington slit Dabo Swinney's throat open under the guise of giving him a close shave and then proceeded to run for 176 yards on 27 attempts all the while wearing a (now) very red raincoat. Bravissimo!

So what's Virginia Polytechnical Institute's weapon of choice? They're just happy anyone will go home with them at the end of the night at this point. Averaging a fairly balanced 227.4 yards passing (good for 66th in the entire country) while also rushing for 200.2 (which on the other hand puts them high up at 25th nationally) means David Wilson and Co. can awkwardly go up to the youngish-looking teacher, jokingly ask her to dance, and still seal the deal! Or they can play it smooth and lie about having a football scholarship lined up and still seal the deal! It doesn't even matter! Beamer's bunch are smooth criminals like that. Against Duke, no one gave anything close to a crap other than Sunday Chick Fil-A aficionado David Wilson as he got his to the tune of 148 yards on the ground and helped eke out a victory that saw all of 3 points scored in the entire second half. It's the only way Frank Beamer can get off these days in a non plural partner key-in-basket scenario. Two weeks prior, they beat Boston College relying on Wilson's vortex surfing Sonic the Hedgehog legs but also got 268 yards through the air on an efficient 24/36 passing effort from sophomore QB Logan Thomas. Onward, young squire!

ADVANTAGE: Georgia Tech. Sure, David Wilson gets the luxury of running against an Al Groh coached defense, but CPJ's crew can just run veer plays for like 3 days.

Mascot. Georgia Tech's Four Loko fueled bee dubbed 'Buzz' gets off to a bad start courtesy of being a honey bee with gigantic bug eyes. While the increased peripheral vision is a plus, the health care costs for getting that many individual lens contacts must cost the school a small fortune. It's also rather inconvenient that once he stings an opponent, he will most probably die within 24-48 hours. Choose your formidable opponent wisely, abnormally large insect friend.

Virginia Tech answers with a darkly colored turkey. Everyone enjoys turkey, though usually only once or twice a year. Turkey sandwiches are passable, but a Hokie sandwich sounds like something I don't think any of us could fully commit to (except of course that poor bird).

Since neither do much for the neutral observer at first glance, let's go further into the tale of the tape to procure a victor: 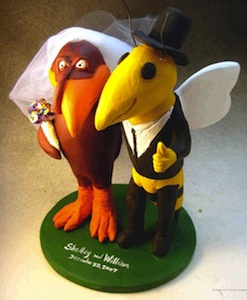 The divorce was hardest for Buzz, as ultimately HokieBird received nearly 2/3 of his total assets [via pre-nup fail].

Aura. Bobby Dodd Stadium is the punchline of many a joke throughout ACC country. As a downtown Atlanta facility without consistent football success and a fan base chided for not matching the lunatic fringe obsession of their largest in-state rival, it can't come as a total shocker. That being said, the Big Boi concert several years ago sure sounds like it was totally the mad note!

Virginia Tech, on the other hand, comes from a home field notorious for pumping in early 90's Metallica, lightning that can strike color analysts' car at will, and enough rail drinks to kill a small puppy. Going into a library (even an ostensibly ruckus one) could very well unnerve them. 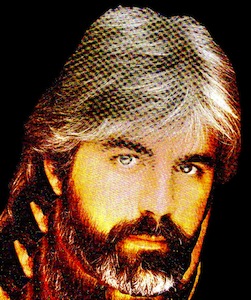 Antone Exum: A cytoplasmic weapon you'll need ammo refills for later on in the level.

Alonzo Tweedy: The rightful heir to the Wilco fortune.

Derek DiNardo: Gerry started his own recruiting pipeline years ago.

Jeron Gouveia-Winslow: Did I do that?

ADVANTAGE: Georgia Tech. Behold, the power of the one, Mike McD!

Grudges/Scores to Settle/Sheer Cusedness? Georgia Tech comes off a sexytime victory of explosive proportions. Virginia Tech comes off a near miss against one of the bottom dwellers of the league. On the other hand, Coach Paul Johnson hates literally everyone. (EDITOR'S NOTE: This is not true, because hate is a feeling, and Paul Johnson feels nothing.)

These two teams have something of a recent rivalry going, with much disdain for one another and conference championship berth implications somewhat a norm in recent meetings.

At the end of the day, the fact of the matter is that Frank Beamer has saved a man's life while Paul Johnson has taken far too many to count, which can only mean one thing: you darn well better err on the side of the weapon of the will of the world as opposed to the one fighting against it.

EDSBS FACTOR FIVE FIVE FACTOR PREVIEW SUMMARY: 4-1, GT. While this is ultimately unlikely to mean anything should Virginia Tech play their very best ball, it's always fun to gloat as though you were any kind of expert at all when your blind ass guess pays dividends. DID WE MENTION THAT COACH PAUL JOHNSON THINKS CRAIG JAMES IS CUTE FOR A BEGINNER?