Share All sharing options for: TOM RINALDI REPORTS FROM EVERYWHERE

For a war correspondent to miss an invasion is like refusing a date with Lana Turner. --Robert Capa.

A high official, a vice president here, stepped out of Old Main administrative building to say that Graham Spanier is the still the president of Ohio State University. --Tom Rinaldi

Studio: For more on the situation on the ground at Penn State, we go to ESPN correspondent Tom Rinaldi. Tom, what are the students angry about? 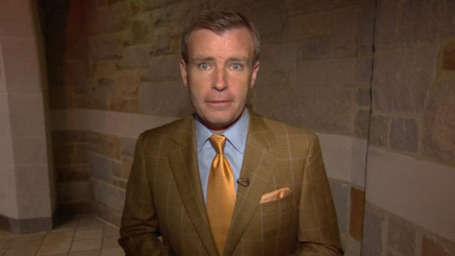 A brick wall. A wall, indeed, of bricks. Built one by one, stacked on top of each other. Each strong, but each making something larger than themselves in arrangement. Like this university, an edifice of individual parts, now rent asunder by an earthquake. A scandal in the family. A crack in the wall, one that threatens to bring down the entire monument Joe Paterno has built to integrity here in State College. Reporting live from a basement in Framingham, Massachusetts, I'm Tom Rinaldi.

Studio: Embedded with the 113th Cavalry, Tom Rinaldi brings us live and unprecedented coverage of Operation Enduring Freedom. Tom? Can you hear me? Are you on the ground? What is the situation there? 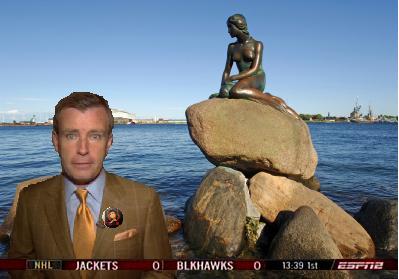 Copenhagen. Hans Christian Andersen saw mermaids in the waters of its harbor. They were exquisite creatures of fantasy: half woman, half fish. Torn between two worlds, they sought comfort in the light of the sun, and in the irresistible depths of the crushing deep. It is only appropriate that this city has another mermaid coming to town this week. She has fought through the depths of addiction. Of poor choices. Of a sadness she can never quite shake. She hopes, one day, to swim to the light of sobriety, and balance out the mermaid's craving for the light and darkness. Neither fish and certainly not fowl, Paula Abdul begins her 2003 European Tour tomorrow here in Denmark. She hopes to do it the way she's always done it: straight up, and marching like Christiansen's steadfast tin soldier to her only enduring partner: rhythm.

Studio: On this most incomprehensible of days, we turn to Tom Rinaldi, live from Lower Manhattan. Tell us, Tom, what are you seeing? 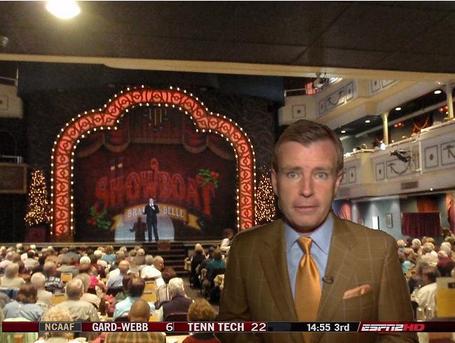 The song fills the air. Song, like a dream on the wind, floats around you, the poet says. Is Johnny Mathis a poet? If so, how does a poet's life end? In the foothills of the Ozarks, he tries not to separate the verse from the song. They are too close, too married to each other. It is the only marriage he will ever know, and the only he may ever need. Somewhere between the hiss of the steam trays at the buffet and the rustle of colostomy bags in the audience, he still sings of love lost and hope found. Can he find that hope here in a dinner theater in Branson, Missouri? Can you find him? If the rest of his amazing life has been any indication: chances are, your chances are pretty good. Back to you, guys.

Studio: For more on the L.A. riots and their effects on the sports world, let's go to Tom Rinaldi on the scene in L.A. 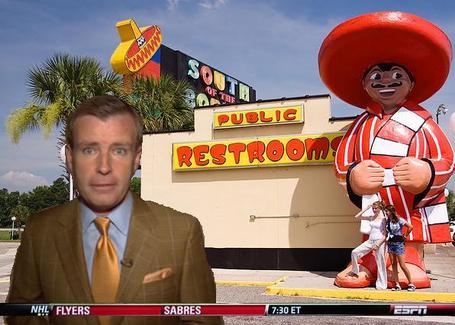 A riot. A disturbance in order. When violence enters your life, it leaves a mark. That mark leaves a memory. That memory becomes its own mark. And that mark of a memory of a mark sometimes becomes a story.  South Carolina and violence have always had an uneasy marriage. The tracks of the Civil War lead to Fort Sumter's cannons. The civil rights movement failed to move the Confederate flag from the sky above the state capitol. And yet, in the midst of this, South Carolina agreed to one union. A union of beans and sombreros, of a desolate stretch of interstate and commercial opportunity, and of one man's dream to create an oasis in a sea of hatred. This is the story of a riot. A riot of innovation in Dillon, South Carolina. South of the Border, and somewhere just east of hope, I'm Tom Rinaldi.

Studio: He's the best in the business for a reason, guys. Thanks, Tom.

Studio: Let's go to Tom Rinaldi on the amazing happenings at the Berlin Wall. Tom? 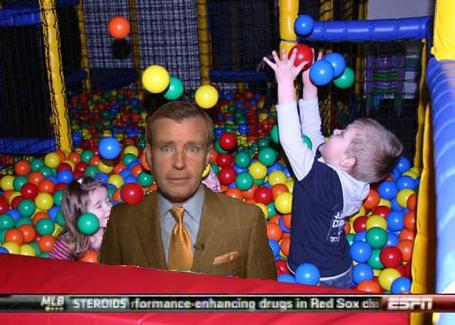 What does joy taste like? For the poet Rilke, joy was the taste of fresh strawberries. For Ernest Hampton, the former high school football star jailed wrongfully by the state of Georgia for crimes he did not commit, it was something different: the taste of a fountain Coca-Cola, taken straight from the tap at his hometown general store. For thousands of others, though, the taste of freedom is inseparable from other sensations. The sound of wooden balls rolling like the waves of the sea up a skee-ball ramp. The digital gunshots of the video game "N.A.R.C." The compelling chords of Pole Position booming across an arcade. If there is a taste, it is for these thousands the rubbery cheese of a plain pizza being devoured seconds before a plunge into the joy of a ball pit. There is another name for the joy felt at this Chuck E. Cheese today.

From a ball pit in Spokane, Washington, I'm Tom Rinaldi.

Studio: A sad and incomprehensible day for the Republic. For some clarity, we with all due haste join Thomas Rinaldi  for additional correspondence from the WHITE HOUSE and environs on the sad assassination of our beloved President Abraham Lincoln. 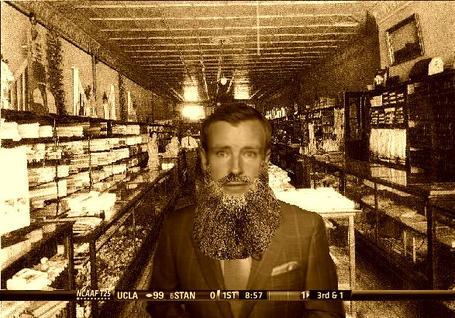 A corner store. A pair of woolens. A slab of unwormed, well-constituted bacon. Stacks of hard tack. What story do these items tell by themselves? Do they show the carpenter haplessly hunting with his long pixeled rifle? Do they show the sorrow of the banker, who money but not the skills to repair his wagon on a desolate stretch of Kansan trail? Can these objects channel the terror of the landlocked farmer turning his boat left, and then right, and then left again for no reason before spilling his family into the river? Oh, if only he had the money to pay the ferryman! Poor Liza would not be dead, and buried under a sad tombstone that reads "Here lies LIZA: LOVES BRIAN FARTS FARTS."

Can this corner store tell those stories? Can hope die of dysentery? Live on the Oregon Trail at THE GENERAL STORE and buying three axles for $80, I am Thomas Rinaldi.