I ALONE BURN YOU/ I ALONE TEMPT YOU. 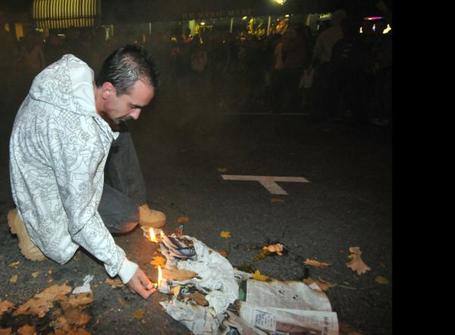 Last night's events were not really a riot. Riots are the kind like they had in Seattle, where a friend calls you and says "I've been breathing through a rag on top of a van for 30 minutes because SHIT JUST GOT REAL." Riots don't have this dude, Busted Ass Ed Kowalcyk, trying to light some wet leaves on fire. Riots don't have Gregg Doyel making fun of them. (And even if you don't like Gregggg, he was all over the place in State College last night. He may have missed his calling as a war correspondent, and we're not even being facetious about that.)

BUT YEAH. Joe Paterno, after the most awkward press conference ever, one fizzly riot, one broken tailbone, and one very long night of crowd control by the State College, PA police, is no longer the football coach at Penn State. He was fired over the phone by the Board of Trustees last night shortly after the resignation of Penn State President Graham Spanier. Tom Bradley is the interim coach for Saturday's game against Nebraska. At this point we're just reciting facts and pointing to funny pictures. Like this one. 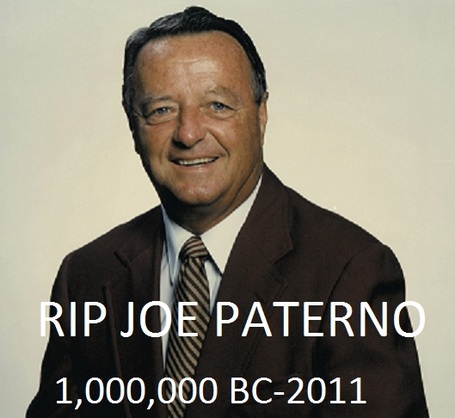 There are other things going on. Let's talk about those for a minute.

"CUT OR UNCUT, COACH RICHT?" The question that prompted this was allegedly "Any suspensions we need to know about?", but the response is great because a.) Mark Richt never gets angry ever, and b.) because as the internet has pointed out already, he sounds like Ron Swanson here.

LOOK AT YOU BIG BALLER. Just Holly hanging with Case Keenum, that's all, after his moment of glory in Birmingham Saturday night.

YOU DON'T SAY. The BCS doing away with AQ status is the most predictable shit ever. It'll make things more fair, says Chuck Neinas, and Mike Slive says he's looking forward to four SEC teams qualifying for BCS bowl slots. The Big East is just over there weeping in the corner, but that's normal.

THE SINGLE GREATEST OBITUARY OF THE YEAR. Heroes surround us.

He was a huge fan of Manchester United, mostly because his beloved English cousin Pete Boardman insisted and despite the fact that his turncoat brother pulls for Liverpool. He also was a huge fan of any University of Alabama team and a huge hater of any of the teams of archrival Auburn University. That did not, however, stop him from marrying a woman who was born at Auburn and graduated from there and therefore enduring 20 years of torture from her Auburn-loving family. He really liked the Atlanta Braves, but had no use at all for any professional football team.