HOW COULD YOU BE SUCH A HOT MESS?

In the night, his ankle rolled,

Asleep on playbooks filled with mold,

Somewhere far along this road he lost his soul

To a team that's a hot mess

How could you be such a hot mess? 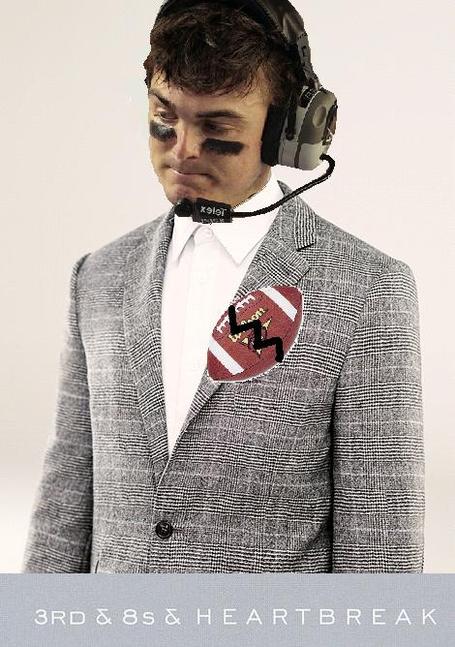 There's nothing that's changed in the past 24 hours about Florida. They're still horrible, and that's not news, but we did get that awesome graphic from Run Home Jack, and that does help things somewhat. If Charlie Weis starts calling plays in autotune "to connect with the kids," we'll know this entire season was an elaborate tribute to Kanye.

IT'S STRANGE BEDFELLOWS BUT WHATEVER GET IN AND SPOON US YOU HANDSOME BASTARD. It sucks to agree with Lane Kiffin, but a ten grand fine for criticizing some typically awful Pac-12 officiating--and doing it rather gently by saying he was disappointed in them--is some high grade bullshit. However, we do salute the advanced Dad-rhetoric of using the word "disappointed," and now await Steve Sarkisian topping him by suggesting that conference officials "go to their mat and think about what they just called for a minute."

TJ McDonald was also suspended for his hit on Chris Owusu in the Stanford game, and that seems as dodgy a call based on a.) McDonald leading with the shoulder/elbow, not the head and b.) the bang-bang nature of the play. Suspensions should be for the grand, premeditated helmet-to-helmets and forearm shivers to defenseless receivers, not the random car crashes that happen when play is moving well past the threshold of body control. The calls aren't going to be easy, and there's really no clear line, but the effort has to have a bit more of an attempt at clarity than that. (What's a hit that deserves suspension, you say?  This is a hit that deserves a suspension.)

DO WHAT WORKS. Rocky Top Talk hits on the eternal debate between doing what you would like to do on offense, and then doing what you can. (Answers for both them and Florida: "score points, and nothing.")

WE LEAVE THAT TO THE MANAGEMENT.  The most important quote of all in the USA Today story on conference expansion and ESPN's role in driving realignment.

Counters ESPN's Magnus: "We don't determine the format. We leave that to the stewards of the sport."

And the stewards of the sport are...no one. Burke Magnus ain't dumb.

ALL HAIL THE NUMERICAL. Case Keenum all by himself is better than like a zillion quarterbacks combined.

WHERE MY DOGS AT? It had to be done: #RonPforlargeassedperformanceartist

MMMM GET MONEY DOMINIQUE WHALEY. Congratulations on the scholarship. Like all great promotions in life, look forward to about two to three months of the words "okaydontfuckthisup" running through your head whether you want it to or not. (Don't listen to it: it's a bug, and will cycle out of the code after a few months.)

JOHN FEINSTEIN REALLY HATES RANDY EDSALL'S ASS. And the rest of him, it seems.

WELCOME BACK, PAT. The Forde Yard Dash is now a Yahoo! property, and Mr. Forde joins the ranks of the free along with Bruce Feldman. We are taking submissions for the next journalist to be extracted from Bristol. Leave your suggestions below.