REMINDER: in order to save lives and your sanity, we will be holding a discussion group for the first half of the Cal Oregon game starting at nine o'clock. It begins with the game at 9:00 p.m. ET, and will continue to the end of the first half because we don't have that much booze in the house, that's why. It will be like MST3K for football, but more awkward, improvised, and about 1/5th as funny if we pull it off. Post will go up around an hour before.

Also, in the meantime, read Holly's review of WKU/MTSU tonight. It will be on while you are waiting for Oregon/Cal, and you only have to watch it for an hour or so.

The Factor Five is undefeated on the season, and with good reason: we have done exactly one of them, and hit it in an easily called NC State debacle against Cincy. This week's Factor Five concerns the Cal/Oregon game, an equally likely bloodbath involving a team that plays badly on the road versus a team that turns teams into clouds of red hemoglobin mist at home. Never say we don't rig these, because we do.

The case last year--a team that excelled in slowing the rush facing a team that relies heavily on the rush--remains the same, with Oregon leading the Pac-12 in rushing offense at exactly 299.5 yards a game and Cal allowing 78.25 yards a game. What has changed is the locale, and that does matter for Cal, a legendarily shitty team on the road who remains overly dependent on the weird magnetic waves coming off the fault line running directly beneath their home field. The spread is something like 23 points, but Cal's productive run attack against a shaky Oregon run front should help them slip under that spread, and make this the sluggish replay of last year's close loss. (Yes, we're getting all excited about close losses for Cal, and seriously Jeff Tedford what the fuck happened to you?)

Category Two: Mascot.   Oregon's proud mascot Puddles has literally kicked another mascot's ass on camera. Oski looks like the creepy cartoon villain from a Ralph Bakshi movie about anthropomorphic sex offending animals.This is not a contest and requires only this picture as proof of the ease of this decision. Puddles wakes up, turns swag on, and then reignites dancing swag rocket in the postprandial lull just to let you lawyaz know. 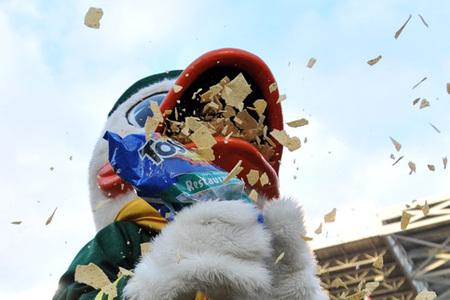 Category Three: Aura.  Autzen has the dubious but honorable status of being the stadium outsiders from the Big Ten and SEC regard as a near-equal in noise and furor, and that's selling the whole experience a bit short. The architecture of Autzen bounces sound downwards, turning the concrete bowl into a steeply banked resonating subwoofer of noise unlike anything else in the Pac-12. That doesn't mean it punches with the same heft of Bryant-Denny or Penn State at full roar, but that does not matter in this context. The stadium with an L.A. face, but an Oakland Booty, if you will.

Also, the Oregon cheerleaders look like well-brushed showdogs, and while not showing up on the scoreboard that should just be mentioned just for aesthetics' sake.

Sean Cattouse. We're sorry, we just read it as "cathouse," and that makes us giggle.

Axel McQuaw. "He's a rebel, he's his own man, he's a pain in the ass...but he's the only man that can refloat the Titanic...IN SPACE!"

ADVANTAGE: CAL. It was over the minute we typed "Brock Mansion."

Category Five: Grudges? Scores to settle? Sheer cussedness? Hell yes. Cal faked injuries last year and was caught badly doing it, so anger is a friend and close confidant of the Oregon Ducks. Last year the slow-motion diving did beg the creation of a simulation penalty in football, but rest assured this did not happen because the Rules Committee thought of it in the hands of refs and saw "15 yards! Simulation" being called on a player with a visible compound fracture on the field.

Would this person have been a Pac-12 ref? No, this would be an SEC ref. A Pac-12 ref would have called "15 yards, roughing the kicker" on a third down with no punter on the field. Remember: SEC refs bend blatantly wrong, while Pac-12 refs lean towards insanely wrong.