SOMEONE NEEDS TO CHANGE GENE CHIZIK. "URRRR THAT'S WHERE THE POOP COMES OUT--" 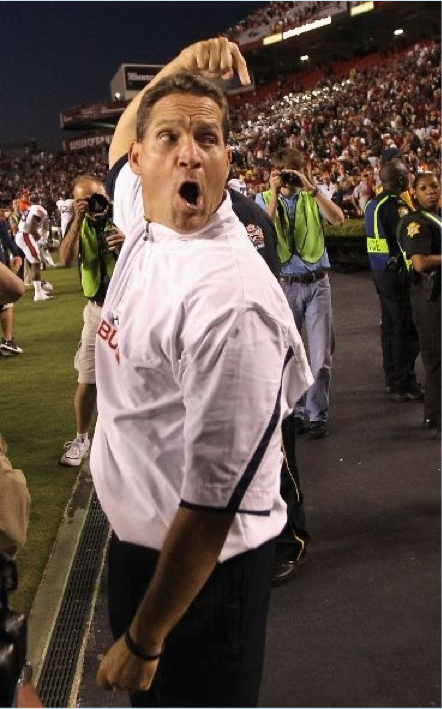 We don't even know anymore. Someday we'll do a list of coaches who have won national titles in the modern era ranked by perceived intelligence, and on that list we guarantee you that towards the top you'll find Nick Saban, Tom Osborne, and Lloyd Carr. Towards the bottom you'll find Gene Chizik twice. Via WER, who assumes this is his O-face, and that is at least seven times more disturbing a thought than imagining him defecating himself on the field. We know exactly what that looks like, btw, having seen our football team do it en masse on Saturday night.

(Question: when will we give Gene Chizik credit for anything? Answer: NEVER. Our unfairness is consistent, persistent, and admitted. BUT BUT BUT no. Never. BUT I HAVE DATA AND THINGS no. Go away. Science is dead to this question.)

YES THEY ARE CLEAR TO SLEEP WITH OTHER PEOPLE.  Mizzou's Chancellor Brady Deaton is free to entertain conference realignment for the Tigers. What this means: Mizzou is open to offers, most likely from the SEC, but not necessarily only from the SEC. This is the admitted bare minimum on conference realignment, but that's all we're willing to give when we could be talking about real football and how little credit we will give Gene Chizik for anything.

CHAAHHHHLIE FEELS THAT IS ABOVE HIS PAYGRADE. Watching an entire 18 minute Charlie Weis press conference! We did it so you don't have to, and can sum up the parts you need to know:

The things we do for you, dear reader.

THE ONLY CONSTRAINT THEORY PLAY THEY RUN IS ON THEMSELVES. Homer Smith never lied about anything that had anything to do with football, and Along the Olentangy takes the hard truth's edge and cuts the Buckeye offense to ribbons.

OUR ONGOING HOUSE FIRE IS REALLY NOT AS BAD AS IT LOOKS. Monte Kiffin says USC's defense that just allowed over 500 yards to Arizona isn't as bad as it looks, and that Iwo Jima really had some lovely beaches when you ignored all the gunfire and screaming.

COLLIN KLEIN'S 'AIRQUOTE CELEBRATION' IS THE NEW BICYCLE. If only because it is intentionally making a future gif out of your celebration. Buzzworthy celebration planning, indeed.

CRYING IS HEALTHY. Well, that's what this report says about crying in football, but we prefer to do our weeping over football the old-fashioned way, just like Bo Schembechler did it: in a special bunker built 150 feet beneath the surface of the earth surrounded by bottles of scotch, leather couches, and portraits of our disapproving ancestors. (Via.)

DON'T TAKE THE ALLIGATOR PERSONALLY. We don't, especially because we'd probably eat one of our own relatives prepared by the ATVS guys.

DEAD, WOLVERINE, WE SAID DEAD. And Australia sucked, Hugh Jackman, AND YOUR LEGS ARE TOO SKINNY WE SAID IT. Positive statement about Wolverines: they make excellent Oliver Hardy stand-ins.