Share All sharing options for: THE CONDIMENT/ANIMAL COMBINATION GOES NATIONWIDE 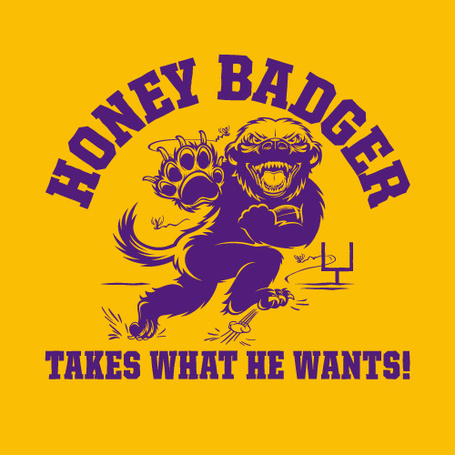 Tyrann Mathieu does have the honor of college football's most relevant name this year, combining internet meme and unholy football talent into a single nom de maimage: The Honey Badger. He does take what he wants, and does not come close to giving a fuck about it, so the name is appropriate. He also eats, like, eight or nine poisonous snakes at a time, scarfing them down like Fruit-By-The-Foot. (Ask any Louisianan: SNAKE MEAT STIMULATE THE VIRILITY GLANDS.)

The meme need not be limited to "Honey Badger," however. Please note the semantic power of the "Condiment/Animal" combination, which may be applied with success to any number of players. (And remember, we take our condiments very seriously at EDSBS.) Examples follow.

Case McCoy IS The Splenda Marmot. Kind of toothy, and a variation of another condiment Texans were overly fond of.


Jarrett Lee IS The Light Ranch Dressing Donkey. Both being more useful than you're willing to admit.


Russell Wilson IS the Butter Panther. Stealthy, a killer, and now with a hint of real dairy flavor.

Melvin Ingram IS The Tabasco Moose. Huge, peppery, and unstoppable. Also moves faster through the system or underbrush much faster than you think it should, and does damage the whole way.

Marcus Lattimore IS The Salty Warthog. Tough to take down, burns when poured into cuts.

Denard Robinson IS The Magic Shell Platypus. Kind of bullshit and clearly made up on the spot, but NOM NOM NOM MOAR PLZ.

Tajh Boyd IS The Nutella Otter. Playful, delicious, and like adorable otters is capable of ripping your throat out.

Matt Barkley is the Vanilla Heron. Majestic in flight, and often endangered despite his beauty.

Robert Woods is the Honey Mustard Jackalope. Yes, there are other options in the store, but I guess you really can get by with just this one.

Andrew Luck is the Sriracha Dolphin. Just awesome on all counts, and has saved humans on many occasions.

Nick Foles IS The Mustard Dingo. A tart and durable scavenger of yards.

Tyler Bray IS The Adobo Bonobo. Supwitchu, girl? Spicy, amorous, and someitmes falls out of trees.

Trent Richardson IS the Flaxseed Buffalo. Goes directly through you no matter the circumstances.

Taylor Martinez IS The Apple Pie Filling Ibex. Hard-headed, nimble, often associated with turnovers, and has no arms.

Robert Griffin III IS The Wasabi Grizzly. Powerful, intense, and like most bears will be dormant from January until he resurfaces in spring for the NFL Draft.

Tommy Rees is the Boysenberry Preserves Flying Squirrel Because dammit you dropped it again and now everything is purple.