HOW WAS YOUR WEEKEND OURS WAS GODDAMMIT 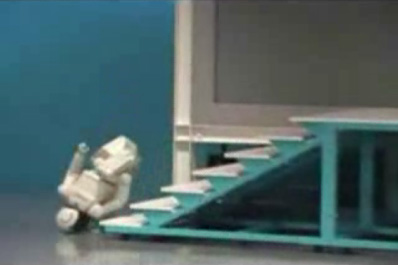 We'll write about it. For the moment, that's the image of the Georgia/Florida game that sticks with us: a shitty robot that can't climb stairs without falling down and embarrassing everyone watching it.

MAYBE SUPERB GAMES AGAINST UNLV AREN'T ANYTHING TO GET EXCITED ABOUT AFTER ALL. In the long list of poorly inferred storylines from September, that one about LSU being good turned out to be totally right.

THIRTY NINE MINUTES WILL DO THAT TO A MAN. The Georgia Tech offense mobbed Clemson's defense on Saturday night to the tune of 39/21 in terms of total possession, and that and a recipe for Puntd Cake will get you your first loss on the year in a hurry.

I WAS USING THIS KNIFE TO SHOW YOU HOW MUCH I LOVE YOU NO REALLY.  USF backup offensive lineman Tony Kibler was arrested on two felony counts of using a knife in two manners we have judged to be against the very rules of society itself: using it as a lockpick, and waving it around in a threatening matter. This is bad, but it is worse when it is revealed that he was allegedly using it to pick the lock on a door in a dispute over a relationship-gone-bad. She'll understand, she will, but only after I break into her room and explain things to her while holding a knife.

GO BRUINS. It's a weird place in time/space where you have to remind a fanbase that a win is a good but illusory thing, but that's where UCLA is. You could also mention that they played Cal, and that in 2011 is enough to explain everything.

WEEK IN AND WEEK OUT. We don't know how he does it, but we all have talents.

THE SONG PLAYING IN OUR HEAD SINCE THE SECOND HALF OF THE GAME IS AFTER THE JUMP.